His Namaz-e-Janaza was offered at Mubarak Masjid in DHA Phase V Extension after Asr prayers which was attended by a large number of fellow Aligarhians, friends and relatives.

Meanwhile in a condolence message, Engr Anwar Ali, Vice President, AMUOBA, has expressed his profound grief and sorrow over the death of Muneer Mohammed Khan and prayed that may Allah SWT rest the departed soul in eternal peace and grant fortitude to bereaved family to bear this loss.
Posted by Chief Editor at 4:30 PM Links to this post 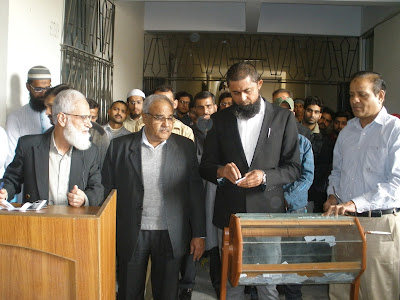 The Aligarh Institute of Technology (AIT) has, for the first time, introduced Hajj ballot scheme for its employees and staff, Engr Anwer Ali, Convenor AIT, announced.

According to him, commencing from this year, the AIT will send two persons to hold land to perform the sacred ritual of Hajj at AIT expenses.

He disclosed that two lucky employees were selected through ballot held at the AIT Auditorium on January 10.

Engr Anwer Ali said that in order to facilitate the female employees, if they emerged successful in the ballot, the AIT was also going bear the expenses of her spouse/mehram.

Meanwhile the staff of AIT has welcomed and praised the management for introducing Haj Balloting scheme, which is set to become a regular annual feature.

They thanked Engr Anwer Ali, Convener AIT, for taking this noble step and expressed the hope that this practice will continue in future as well.
Posted by Chief Editor at 4:22 PM Links to this post 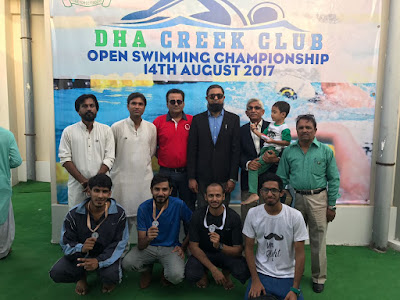 The SSUET took three medals in the event which was jointly organized by the Defence Authority Creek Club and the Pakistan Marine Academy. Mohammad Ahmed claimed silver medal in 50m freestyle and bronze medal in 50m butterfly while Hyder earned bronze in 100m breaststroke.

The Convener of the Aligarh Institute of Technology (AIT), Engr Syed Anwer Ali, who is also the Vice President of the Aligarh Muslim University Old Boys Association (AMUOBA), honoured the members of the SSUET swimming team and congratulated them on their worthy efforts in the open championship contested by 14 institutes from all over the province. 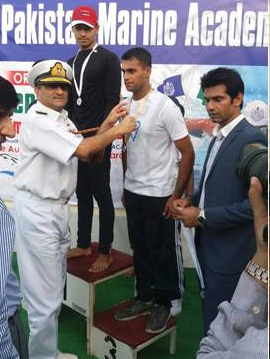 The Independence Day Open Swimming Championship was recognized as a success story by the participants and the hosts were appreciated for having conducted the event nicely.

In fact the Sindh Sports Minister was so much impressed with the facilities at the venue and he considered it to be an ideal host for future swimming competitions.

Cake cutting also took place and it was followed by a flag retrieving ceremony, conducted with traditional fervor and enthusiasm.
Posted by Chief Editor at 9:54 PM Links to this post 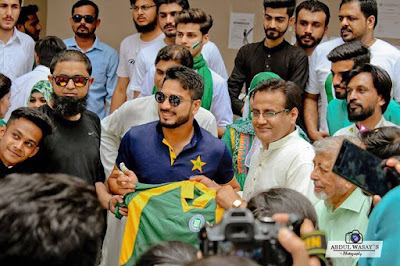 The Sir Syed University of Engineering and Technology (SSUET) was set alight by the visit of left-arm fast bowler Rumman Raees, one of the heroes of the ICC Champions Trophy Cricket Tournament 2017, as part of the celebrations of Pakistan’s 70th Independence Day.

The Convener of the Aligarh Institute of Technology (AIT), Engr Syed Anwer Ali, who is also the Vice President of the Aligarh Muslim University Old Boys Association (AMUOBA), greeted the cricket hero and described him as a role model for the youngsters.

Engr Anwer Ali, himself an all-round cricketer of merit, lavishly praised the performance of Pakistan’s cricket team which saw them win the Champions Trophy in England against all odds. 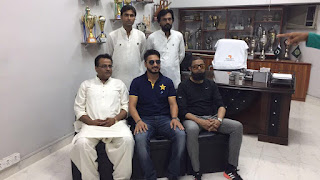 Rumman Raees, who was one of three debutants in the tournament, performed exceedingly well in his only appearance and he was very rightly hailed as one of the heroes.

“It’s in the fitness of things that the Champions Trophy winning Pakistani cricketers returned home to a heroic welcome wherever they went around. It was heartening to watch the fans thronging the airports and gathering outside their residences to celebrate the triumph,” Engr Anwar Ali reckoned.

“All the members of the team deserved credit for having made the nation proud with their outstanding performance. From skipper Sarfraz Ahmed down to Rumman Raees all of them deserve to be hailed as heroes,” he added. 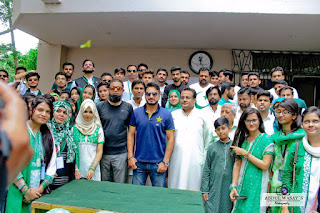 “The presence of Rumman Raees here at the SSUET has thrilled us and what an occasion he has chosen to be with us. His presence in the Independence Day celebrations has made all of us excited and ecstatic,” Engr Anwar Ali complimented.

Rumman Raees is a welcome addition to the list of high quality left-arm fast bowlers produced by Pakistan. He had come to the limelight in the inaugural edition of the Pakistan Super League (PSL) in 2016 and he was duly rewarded with Pakistan debut in a T20 International against West Indies later the same year. 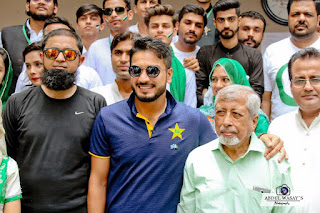 He turned out to one of the star performers of the second edition of the PSL in 2017 during which he picked up no less than a dozen wickets in just seven matches. He was chosen for the limited-overs leg of Pakistan's West Indies tour in April 2017 but was originally omitted from the Champions Trophy squad.

It was the injury to Wahab Riaz during the course of the event in England which created a vacancy and Rumman Raees was drafted in as replacement.

He made his memorable debut in One-day Internationals in the high voltage semifinal against England after Mohammad Aamir had to pull out at th
Posted by Chief Editor at 9:51 PM Links to this post 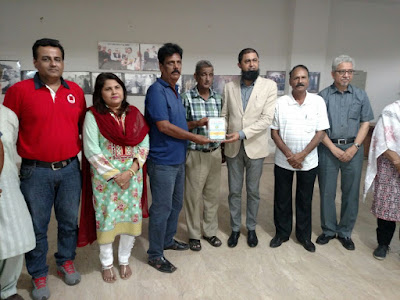 The Sir Syed University of Engineering and Technology (SSUET) emerged victorious in the Independence Day tug of war competition organized by the Karachi Tug of War Association (KTWA) at the Customs Sports Complex housed in Federal-B-Area.

The SSUET won the Independence Day contest by overpowering Central Fitness Club who was soundly beaten in a couple of successive rounds.

The Convener AIT, Engr Syed Anwer Ali, who is also the Vice President of the Aligarh Muslim University Old Boys Association (AMUOBA), was the chief guest in the prize distribution ceremony.

Engr Anwer Ali, himself an active sportsman, praised the efforts of the organizers in promoting the sport of tug of war which is an ancient athletic contest between two teams who haul at the opposite ends of a rope.

He spoke about the significance of sports in building a healthy society, urging all the stakeholders to work jointly to achieve the common goal.

The Secretary of the Sindh Olympic Association (SOA), Ahmed Ali Rajput, also attended the presenting ceremony alngwith the officials of the KTWA.
Posted by Chief Editor at 4:49 PM Links to this post 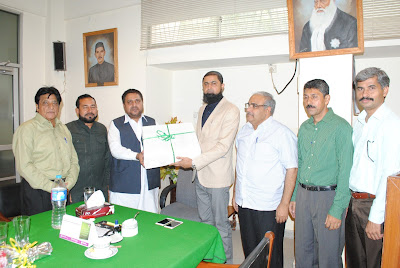 The Aligarh Institute of Technology (AIT) added another feather in its cap by strengthening its DAE-CIT department whose advance computer lab was equipped with a fleet of 25 more computers with latest configuration and multi-media projectors.

The Director Academy and Training, Sindh Technical Education and Vocational Training (STEVTA), Engr Liaquat Ali Jamro, who was the chief guest on the occasion, did the honours at a graceful inauguration ceremony.

The Convener AIT, Engr Syed Anwer Ali, who is also the Vice President of the Aligarh Muslim University Old Boys Association (AMUOBA), in his brief speech, observed that greater emphasis was being laid on the promotion of academic and sports activities for an all round development of the students. 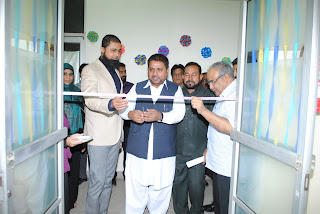 Engr Anwer Ali, the motivating force behind the phenomenal success of the AIT in the recent past, announced that there were concrete plans to provide more facilities to the students as well as to the staff in the near future.

Shahid Jamil, Head of the DAE-CIT department, informed the audience about the academic and welfare facilities that AIT was offering to its students.

The chief guest was taken round the new laboratory and he greatly appreciated the facilities being provided by the AIT. He enquired about the equipment and software facilities. 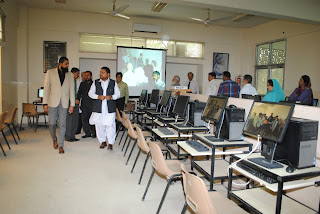 Engr Liaquat Ali Jamro acknowledged the efforts of the AIT Convener, Engr Anwer Ali, and its Principal Prof Dr Mahmood Khan Pathan in the development of the institution.

He recognized the AIT as the top most institution for technical education in Sindh, assuring his full support for further development of the Institute.

Syed Rehan Ali, Incharge Evening Programmes, presented the vote of thanks while souvenirs were presented to chief guest by the Convener and the Principal of AIT.
Posted by Chief Editor at 4:34 PM Links to this post