Sindh has recorded highest number of COVID-19 deaths in a week, as the provincial health department confirmed as many as 14 new deaths in Karachi and two other districts, Hyderabad and Larkana on May 23, pushing the overall death toll to 354 for the province.
According to official statistics, at least 12.28 persons lost their lives to coronavirus daily during the week ending on May 23, in comparison to the preceding week (May 10 to 16) when on average 11.42 persons died of the lethal disease on a single day. The latest one week’s death tally (86) was the all weeks’ highest in the province. 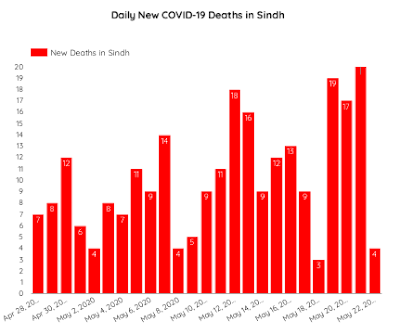 Keen observers noted that the death rates progression was alarming, particularly when coronavirus restrictions have eased about a week back.
The government needs to assess relevant intensive care quality both at the private and public hospitals and medical service delivery in the case of patients kept in home-isolation.
According to a report, as many as 20 COVID-19 patients died on May 21, including 16 who lost their lives on ventilators. The remaining four off ventilators death included two patients who died at home and another two due to sudden pulmonary arrests.
The Sindh Chief Minister, Syed Murad Ali Shah, in a statement on May 23, informed that 155 patients were still in critical health conditions, out of which 34 were put on ventilators.
The official daily summary revealed that 10 of the men patients, who died during the last 24 hours ending at 8 am on May 23, were aged from 47 to 78 years while two deceased women were respectively 65 and 74-year-old.
With the latest deaths the tally of fatalities rose to 292 for Karachi. Hyderabad reported death of an 80-year-old woman while one woman aged 30 years died at Larkana. The two districts have already reported 21 and seven COVID-19 deaths respectively.
On May 23, Sindh reported 762 new infections with Karachi (669), Larkana (20), Sukkur (17) Hyderabad (15), Khairpur (15), Shikarpur (8), Ghotki (5), Kambar Shahdadkot (3), Jacobabad (2), Mirpurkhas (2), Jamshoro (1), Badin (1), Thatta (1) and Tharparkar (1).
As many as 198 patients recovered from the diseases during the last 24 hours, while the number of total infections came as 21,645, according to the summary.
Posted by Chief Editor at 8:54 PM

Pakistan News & Features Services
The residents of PCSIR Society in Scheme-33, Gulzar-e-Hijri, Karachi, staged a peaceful protest against the Administrator of the society and its Secretary to demonstrate their disgust against recent incidents of firing, water shortage, thefts and other safety and security related issues besides illegal acts of the administration. 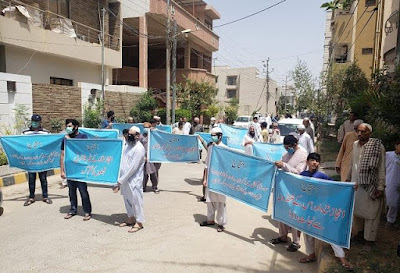 Dozens of residents, carrying banners inscribed with slogans for ensuring security and safety of the residents, maintained social distancing as part of protective measures against coronavirus during the demonstration.
Presently the residents of the society are believed to be in a grip of fear due to looming safety and security related issues as well as maladministration and malpractices on the part of office-bearers, vested interests of Administrator Aijaz Ali Shah and the controversial secretary Bashir Ahmed and his sons.
It may be mentioned here that Gulzar-e--Hijri police have registered a FIR lodged by the residents of the PCSIR Society against firing incidents and safety and security lapses.
According to details, the society's secretary and his sons have obtained pre-arrest bail from the Court of Additional Sessions Judge Malir in the FIR No 404 of 2020 under section147/148/149/337-HI/506-/B-504/109/337-Al/337Fl from Police Station Sachal.
The court granted pre-arrest bail in the sum of Rs 25,000 each. The court has also directed the SHO Sachal Police to submit complete papers of the case on May 29 when the accused/petitioners have be summoned to appear before the court.
The firing incident in the society took place after a scuffle between the secretary and his sons with residents of the society when they protested against series of issues of safety, security, water shortage, and burglaries.
It’s being alleged that two sons of the secretary happen to be employees of the DMC South who called a group from nearby Abbas Town and they resorted to firing resulting in harassment among the residents including women and children.
The society residents have appealed to DG Rangers and IGP Sindh to take steps to save them from continuous threats and intimidation by the secretary and his sons. They accused the society's administration for mismanagement and embezzlement of funds which when pointed out by residents, they turned furious and resorted to vandalism.
They have leveled similar charges against the society’s administrator, alleging that they minted millions of rupees through various illegal means and illegal conversion of amenity plots for school, ground and dispensary into residential and commercial.
The residents have also urged the Director General Cooperative Societies as well as the provincial Minister Cooperation to order an inquiry into the matter and remove the administrator prior to starting it.
Posted by Chief Editor at 8:53 PM