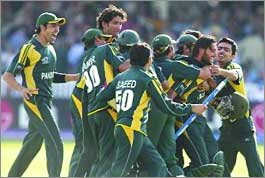 Considered as underdogs, Pakistani cricket players rose to the top by beating Sri Lanka in the Twenty20 World Cup finals at the Lord’s in London yesterday.
The victory coincided with international Father's Day and 56th birth anniversary of Mohtarma Benazir Bhutto.
It wasn’t the edge-of-the-seat final that would have signed off the ICC World Twenty20 in style, but that won't matter to Pakistan who gave their nation a something to savour amid troubled times. From the moment Tillakaratne Dilshan, the tournament's top-scorer, fell in the opening over Pakistan had a grip on the match. Shahid Afridi, who emerged as their trump card, guided his team home in the 19th over with an unbeaten 54, and it was left to Younis Khan to raise the trophy in what he later announced would be his final Twenty20 international, in front of a sea of delirious Pakistan supporters.
The masses were cheering from early on as Abdul Razzaq - a great individual comeback-story among the team's resurgence - claimed three key wickets in his opening burst to leave Sri Lanka on 32 for 4.
The destination of the trophy was sealed when he swung a huge six over midwicket off Isuru Udana in the 18th over - the moment when Sangakkara gambled on one of his weaker bowling links - and followed that with another boundary off a high full toss.
Shoaib Malik played his part with 24 off 22 balls in a match-winning stand of 76 after Kamran Akmal had given early impetus to the top-order.
Pakistan's rise from rank outsiders to champions is an extraordinary display for a team that had to beat Netherlands by a significant margin to even stay in the event during the group stages. However, they have peaked at the right time and couldn't have produced a more complete performance for a final. They fell five runs short two years ago at Johannesburg, but this time there was no mistake.
Sri Lanka, who have been the model of consistency, were caught off guard by aggressive tactics. In a stirring atmosphere, Pakistan were on top of their game from the start as 17-year-old Mohammad Aamer belied his inexperience with a tone-setting opening over. In a clear plan he bowled short at Dilshan who was distinctly discomforted by the approach. Against the fifth ball Dilshan tried to take the initiative with a scoop over short fine-leg, but only managed to pick out the man on the edge of the circle.
He had middled virtually all his attempts at the shot during the tournament and what a time for it to go wrong. (NC Report)
Posted by Chief Editor at 1:13 PM No comments: Links to this post