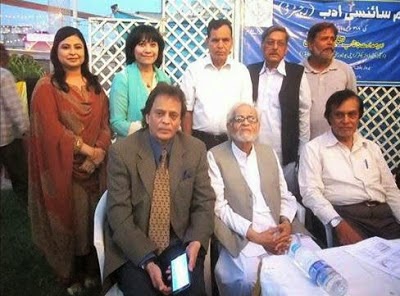 The Karachi University Graduates Forum, established in , has proved its worth and is rendering a great service to the cause of Urdu literature.

Zulfi is the Executive Director of Karachi University Graduates Forum and is now on a visit to .

Afridi, who recently visited , said the forum, which was established by Zulfi, is promoting the cause of Urdu and is visited by eminent people from world over.

He acknowledged the services of Zulfi, particularly in promoting the cause of Urdu literature and said that he has authored a number of books as well.

On the occasion, chief guest Taslim Elahi Zulfi, who is a recipient of Sitara-e-Imtiaz, presented his poetic contribution in a fascinating manner which was acknowledged with repeated applause.

He described Masood Ahmed Barkati, an eminent scholar, as his teacher and said that when he started writing he began it from Hamdard under the guidance of Barkati.

He said that he was also guided by noted poets Josh Malihabad and Rais Amrohvi who gave him the poetic name of “Zulfi”, because of his long hair. On the occasion he presented his poem on solar energy which he had written during his first visit to theBazm Sciency Adab many years ago.
The gathering was also addressed by Prof Dr Zahida Maqsood, Prof. Rais Alvi and Shugufta Shafiq while Aziz Ahmed Siddiqi, Dean Ziauddin University, presented his paper on “whether our nuclear reactors are safe”.

Ali Zafar Khan Afridi, on the occasion, also presented a set of books to Taslim Elahi Zulfi on behalf of the Bazm.