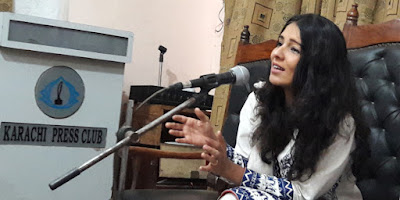 There is a perception that people with mental illness are violent, look different from others, can never get better or cannot be productive members of society. These inaccurate and misleading stereotypes impact adversely on people's struggle to cope with their condition.

These were the views of Dr Ayesha Mian, an associate professor and chair of the Department of Psychiatry at the Aga Khan University (AKU) while addressing journalists at a dialogue on mental health at the Karachi Press Club (KPC).

The session was organized by AKU in coordination with the club’s Health Committee.

“The studies show that people with mental illness are much more likely to be a victim than a perpetrator. Media should come forward and be strong partners against this social bias,” she stressed.

“Family members, friends and the society in general have a vital role in helping people recover from mental illness. They need positive attitude and acceptance of their conditions,” she added.

It is estimated that approximately 50 million people suffer from common mental disorders in Pakistan. The illness afflicts 15 to 35 million adults, which is approximately 10 to 20 per cent of the population. Additionally, approximately 20 million children, or over 10 per cent of the population, need attention from mental health practitioners. Unfortunately, there are only 400 trained psychiatrists in the country, meaning that there is roughly one psychiatrist available per half-million people.

Dr Ayesha Mian explained that mental illness refers to a wide range of mental health conditions that affect mood, thinking and behaviour. People go through periods when they feel emotions such as stress and grief, but symptoms of mental illnesses last longer than normal and are often not a reaction to daily events. When symptoms become severe enough to interfere with a person’s ability to perform day-to-day chores, they may be considered to have a significant mental illness.

She described factors that may lead to depression, anxiety and addictive behaviors, and eating disorders, stressful life situations, use of alcohol or recreational drugs, imbalance of a chemical substance in the brain, and genetic disorder or having a blood relative with a mental illness. Exposure to environmental stressors, inflammatory conditions, toxins, alcohol or drugs while in the womb can sometimes be linked to mental illness.

“While not all mental illnesses are preventable, some changes in lifestyle can significantly help. Be an organized person in your routine life, take wise and timely decisions, and take good care of yourself with healthy eating, regular physical activity and sufficient sleep, usually seven to eight hours for adults. Avoid conflicts in personal as well as professional life, try to participate in social activities, and get together with family or friends regularly. Avoid alcohol and drug use,” she advised.

“Pay attention to warning signs, for example, inability to cope with daily problems or stress, and have an evaluation by a mental health or other healthcare professional. In most cases, symptoms can be managed with a combination of medications and therapy or counseling,” she emphasized.

On the occasion, Dr Ayesha Mian also informed that AKU’s 19th National Health Sciences Research Symposium will focus on mind and brain. Starting from November 4, the annual conference will bring together hundreds of national and international healthcare professionals working in the field of neuroscience.

Apart from the covering journalists, the session was also attended by Professor of Neurology at AKU, Dr Saad Shafqat, Secretary General of KPC, Alauddin Khanzada, Secretary of Karachi Union of Journalists, Shoaib Ahmed, and the club’s Health Committee members, including Waqar Bhatti and Hamid Rehman Awan.
Posted by Chief Editor at 8:50 AM 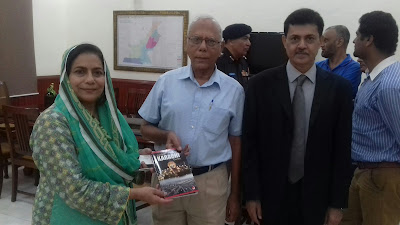 Parveen Agha, Chairperson and Secretary of the Pakistan Railways (PR), has unveiled plans for the further development of the organization to transform into a most viable entity while it has attained financial autonomy with revenue generation having gone up from Rs 18 billion 3 years back to 36 billion at the financial close.

Ruling out the privatization of the PR, she made it absolutely clear to all concerned that the resources were being mobilized to turn it around in the larger national interest.

She said that none of the trains have been privatized but only their operation handed over to private sector operators.

She stated that the private operator of business train was in default of around Rs one billion and the train was now being run by the PR itself.

Talking to media at the Divisional Headquarter, during her ongoing visit to Karachi, she dispelled the impression that any proposal on privatizing the PR was being considered at the highest level. The Divisional Superintendent Railway Engr Nisar Memon, and the SSP Railway, Robin Yamin, besides the Deputy DS (Operations) were also present on the occasion.

Parveen Agha informed that under the umbrella of the China-Pakistan Economic Corridor (CPEC), the railway infrastructure is being upgraded in collaboration with Chinese and major ingredients of the project were finalized during a recent meeting of a high level Pakistani delegation which included Federal Planning Minister, Ahsan Iqbal and Federal Railway Minister, Khawaja Saad Rafiq, besides herself which undertook a tour of China. 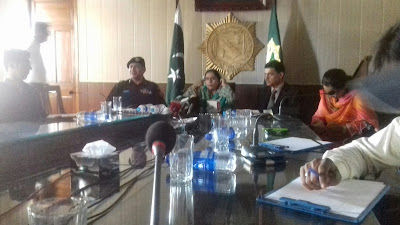 Under the project railway system will be upgraded from Peshawar to Lahore and then from Lahore to Karachi sector wise with Lahore-Multan Sector to start first.

She said that upon completion the train will run at a speed of 160 km as against 100 km/hour at present reducing the travelling time substantially.

She informed that the Asian Development Bank (ADB) has approved the funding of Rs 2.5 billion for the Lahore-Multan project while the Lahore-Karachi segment has been aligned with the CPEC.

Parveen Agha was optimistic about getting the momentous projects completed by 2018 by which time the capacity of PR will be enhanced manifolds.

The Secretary Railways informed that Railway is set to earn another all time high Rs 13 billion revenue through transporting imported coal from Bin Qasim to the site of 660 MW Sahiwal Coal-fired power plant. She said that coal transportation will start from April 2017 while trial transportation will begin in November with the import of Consignment.

Parveen Aga revealed that the freight revenue generation has tremendously increased from Rs 1 billion to Rs 11 billion had high praise for Karachi Railway Division for its contribution.

She said that, with the efforts of present Divisional Superintendent Nisar Memon, this Division alone shared Rs 9.7 billion towards freight revenue.

While referring to running high speed trains, she informed that Railway has finalized an agreement with the General Electric under which 75 locomotive of 4 to 4.5 thousand HP would be imported.

She said that delivery of 55 locomotives will start from November while talks were underway with regard to financial implication for the remaining 20 engines.

To a question, she stated that the much talked about Karachi Circular Railway (KCR) was now a provincial subject and the Government of Sindh was taking care of it.

“The Sindh Government had approached us on this matter a couple of years ago and we had assured them of our wholehearted technical support and facilitation in upgrading and operating the project,” she said.

To another question, she remarked that the PR was tackling the menace of encroachment in the most efficient manner all over the country.

“We have had partial success in this regard. We have succeeded in getting some of the encroached lands vacated, like the Chanesar Halt and the Kalapul in Karachi, besides ensuring that no fresh encroachments took place during the last three years. But a lot has still to be done in this regard to get back our invaluable lands in the larger interest of the PR,” she conceded, adding that the regained lands would be channelized for revenue generation.

To a question she said that the Jaffer Express incident in Balochistan was an unfortunate on, having occurred primarily due to law and order situation while the Patoki train-bus accident had taken place due to negligence of railway staff and the matter was being investigated.

Meanwhile DS Railway Nisar Memon shared with PNFS that the Federal Secretary during her trip has visited Bin Qasim Port, Marshaling Yard besides Karachi City and Karachi Cantonment railway stations, having reviewed the working at length. The PR chief was due to visit the Karachi Port Trust (KPT) on October 10.
Posted by Chief Editor at 8:48 AM