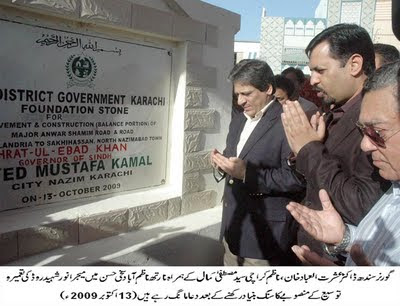 Governor of Sindh Dr. Ishrat-ul-Ebad Khan has said that the newly laid network of roads and flyovers by city government Karachi has besides reducing travel duration and making it convenient for citizens also proved helpful to national economy regaining its strength. Plot owners of Landhi Cottage Industrial Zone will now get alternate plots in Orangi Town Cottage Industrial Zone.

He expressed these views while talking to media representatives at Orangi Cottage Industrial Zone on Tuesday. Earlier Governor of Sindh along with City Nazim Syed Mustafa Kamal inaugurated and laid foundation stone for three roads which have a collective cost of Rs.720million. City Government has constructed the road after cutting the hill to provide a new direct route between Orangi and North Nazimabad Town. Governor of Sindh also laid the foundation stone for two roads on which construction work has already been started. He also inspected the development works of Shahra-e-Qaddafi, Orangi Cottage Industrial Zone and Banaras Chowk Flyover during this visit.

Talking to media representatives, Governor Sindh further said that a total 4 thousand persons were allotted with plots in Orangi Cottage Industrial Zone through balloting in 1994 but they were not given possession of their plots due to unavailability of basic infrastructure including water and sewerage facility. City Government has besides carrying out other mega development works in the city also paid full attention on this cottage industrial zone and already 55 percent of infrastructure work has been completed while 3500 plot owners have also started building their factories in this zone.

Governor of Sindh said that cottage industry contributes 35 percent in the growth of any economy, however it was unfortunate that we did not encourage this industry and now I am sure that this industrial zone would begin production within a year.

He said that the owners of plots in this industrial zone are mostly belongs to lower and middle class who can’t afford to invest in big industries but can play vital role in the improvisation of national economy with their talent and products.

Replying a question Governor of Sindh said that with the rapid development process that happened in Karachi during last four years, everyone in Pakistan has this feelings that this process should continue and speed up further.

He said that considering this fact, President of Pakistan Asif Ali Zardari has given clear instructions that better strategy should be employed to carry on this development so that it could fulfill the basic aim of this process.

He said that the country was at large facing the menace of terrorism but the law and order situation in Sindh has been much better and the credit for this should go to Chief Minister Sindh and low enforcement agencies.

Replying another query Governor of Sindh said that the poor financial condition of country has also affected the city government in Karachi but City Nazim Syed Mustafa Kamal deserves all the praise for he did not let the development process to halt due to financial constraints.

He said that the federal and provincial governments have also supported the development process in Karachi.

Governor of Sindh said that it is the quality of a good manger to manage everything in all circumstances and Mustafa Kamal has this ability.

Earlier Governor of Sindh inaugurated the road which has been constructed by city government with an estimated cost of Rs280million. This one and half kilometer long road provides convenience to residents of Orangi and Baldia Town which has been constructed after cutting the hill. Governor Sind and City Nazim also laid the foundation stone of the road from Qalandria Chowk to Sakhi Hasan in North Nazimabad Town and from Qalandria Chowk kto Abdullah College with an estimated cost of Rs130million and Rs310million respectively.
Posted by Chief Editor at 11:40 PM No comments: Links to this post