The Governor of Sindh, Dr Ishrat ul Ebad Khan, has reckoned that five most challenging factors for doing business in Pakistan doing last year were corruption, tax rates, inflation, access to financing and insufficient government bureaucracy from which corruption was cited as the most problematic.

He made the observation while addressing the presentation of Transparency International Pakistan Integrity Award to Director General, National Accountability Bureau (NAB), Sindh, Lt. Col. Retd. Siraj ul Naeem, at the Governor House in Karachi. The Provincial Ombudsman, Asad Ashraf Malik, and retired judges of the Sindh High Court were also present on the occasion.

‘”The contributions made by the NAB to fight such a huge menace and curbing corruption is based on a three pronged strategy of awareness, prevention and enforcement and it has been immensely successful. Since 2014, the NAB has acted with new zeal and has carried out a detailed analysis of organizational weaknesses, procedures and business processes and human resource development also. It is very commendable that NAB has recovered and deposited Rs. 276 billion in national exchequer since its inception,” the Governor recognized.

He also lauded its work with the youth and establishment of more than 20000 Character Building Societies (CBS) in universities and colleges across the country.

The Governor described the NAB Sindh as an important regional bureau whose performance for the last year has been graded as outstanding and excellent with 88 % Operational Efficiency Index by Chairman Inspection and Monitoring Team (CI&MT).

“Its Director General Lt. Col. (R) Siraj ul Naeem has headed these tremendous results which are commended by all concerned quarters. He deserves this award is the true reflection of his dedicated work,” the Sindh Governor complimented.

Suhail Muzaffar of Transparency International Pakistan informed that this award has been awarded to four global personalities and Col Siraj was only the fifth person to receive the same and the first one from Pakistan.

On the occasion Governor of Sindh handed over the National Integrity award to Lt. Col (R) Siraj ul Naeem. A memorandum of understanding for establishment of CCLC and anti corruption helpline was also signed by the Principal Secretary, Mohammad Hussain Syed and Suhail Muzaffar of Transparency International.
Posted by Chief Editor at 6:17 PM Links to this post 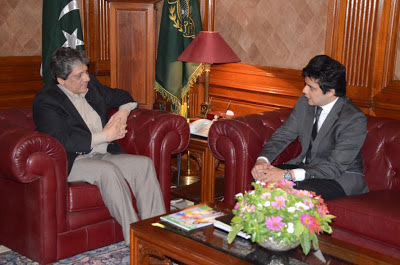 The Governor of Sindh, Dr Ishrat-ul-Ebad Khan, has stated that the issue of pirates could only be resolved by combined efforts of the international community. He added that the Government of Pakistan, on its part, was trying its level best but greater efforts were needed to create awareness about it.

He made these observations during his meeting Diplomatic Consultant Jibran Ahmed Khan, who called on him at the Governor House, , on October 24.

The Green Revolution, a universal movement which aims to bring about a collective spiritual revival in the world through love, was also discussed during their meeting.

Jibran Khan briefed the Governor of Sindh about the efforts being made at the international level to combat the critical issue of pirates and for the promotion of the Green Revolution.

Dr Ishrat-ul-Ebad Khan was appreciative of the role being played by Jibran Khan in this direction, emphasizing that the Green Revolution can be immensely useful in food security besides enhancing economic cooperation between countries.

Sindh Governor, Dr. Ishrat Ul Ebad Khan on Sunday said the Quaid-e-Azam's golden principles-Unity, Faith and Discipline can greatly help cope with the challenges being confronted by the country.

He was talking to media after offering fateha at the mausoleum of the founder of the nation Quaid-e-Azam Mohammed Ali Jinnah on the eve of his 63th death anniversary.

Dr. Ebad said the Constitution of 1973 has been restored in such a spirit that would help develop Pakistan as one of the prosperous countries of the world.

"There is a need to prove to the world that we can bring stability not only to the country but also in the region and the world, he added.

He said purpose to visit the mazar-e-Quaid to pay respect and homage to the father of the nation on his 63rd death anniversary.

Dr. Ebad also inscribed his impressions in the visitors'book.
Posted by Chief Editor at 10:25 PM

Dr Ishrat Ul Ebad Khan Monday resigned from the post of Governor Sindh. He has left for Dubai and his resignation yet to be accepted by the President of Pakistan. Speaker Sindh Assembly Nisar Ahmed Khoro took over as Acting Governor Sindh.
Governor Dr. Ishrat Ul Ebad Khan (born March 2, 1963) studied in the prestigious Dow Medical College, Karachi. As a student he had a penchant for politics and emerged as a prominent leader of a popular student organization, APMSO, a student wing of the Muttahida Qaumi Movement (MQM). The MQM is the third largest political party of Pakistan and the second largest in Sindh, having representation in the Federal Parliament of Pakistan, the Sindh Provincial Assembly and the Azad Kashmir Legislative Assembly. The party enjoys a large following in all units of the federation because of its welfare-oriented egalitarian political manifesto impacted by Mr. Altaf Hussain, the populist leader of the toiling masses. After graduation, he remained the head of the Medical Aid Committee â€“ poor patients' welfare entity of the party. Gradually, he became a front rank political figure of the MQM. On his return from almost ten years of political exile in London, he was appointed to the position of the Governor of the province of Sindh. Dr. Ishrat Ul Ebad Khan assumed the charge of his office on December 27, 2002 as the youngest Governor of Sindh. He is the longest serving Governor of any province of Pakistan since its inception in 1947. Earlier in 1990, he was the youngest Minister in the Provincial cabinet of Sindh, holding the portfolios of Housing and Town Planning. Subsequently, he was also assigned the additional charge of Environment and Public Health Engineering Departments.
Posted by Chief Editor at 1:42 AM Links to this post 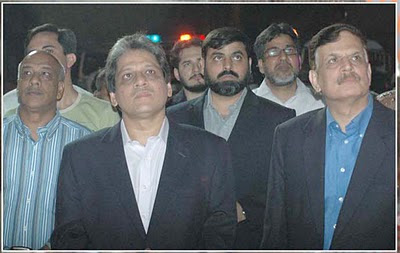 Governor of Sindh Dr. Ishrat-ul-Ebad Khan has said that development work on projects of city was going on as usual and they will be completed on scheduled time. Administrator Karachi is not being changed. Utility services offices are being established beneath the flyovers to provide timely and immediate help and services to citizens in case of any emergency or causality. Government has curtailed Development projects in the country due to present economic condition but nothing such has happened in Karachi. Local government election will be held after amendment in the local government rules with the consent of allied parties.
He expressed these views while talking to media representatives after inspecting the deelopment works of flyover being constructed near Lucky Star at Sharae Faisal on the night intervening Thursday and Friday.
EDO Works and Services Rasheed Mughal, EDO Municipal Services Masood Alam and other officers of city government accompanied him on this occasion.
Governor of Sindh said that though curtailment has been made in the development schemes due to financial condition of the country but the President and Prime Minister of Pakistan has directed to complete the ongoing development projects of Karachi on time. He said that the government would despite of financial constraints complete development projects within the stipulated time while it would also pay the dues simultaneously.
The Governor said that he has decided to visit the development projects without prior intimation and inspect the pace of work so that the project condition could be evaluated correctly.
He said that the development process will carry on and the government will initiate work on more projects so that the aim to solve the problems of citizens could be fulfilled and the citizens get the benefit of development works.
Replying a query Governor of Sindh said that change of Administrator Karachi was not under consideration. Regarding ongoing development projects of Corridor-IV he said that the flyover between Lucky Star and jinnah Hospital will be available for vehicular traffic within next 25 days while the flyovers at PAF Chapter Mehmoodabad and other projects will also be completed as soon as possible.
He said that the experts from both big ally parties of Sindh were presently considering improvement and amendment in the local government laws. There is not disagreement between both parties and only the suggestions are being considered. Local government elections will be held after amendment in the laws.
Governor said that Karachi did not have enough electricity however the problem was being solved with better management so that the citizens of Karachi could be saved from more problems due to shortage of electricity.
Posted by Chief Editor at 3:32 PM Links to this post