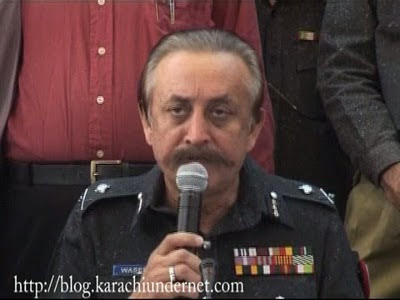 CCPO Karachi Waseem Ahmad has informed that four members of Jundallah who had been arrested have admitted there involvement in attacks on the Ashura procession in Karachi. The criminals were also allegedly involved in attacks on Core Commander Karachi.
Speaking to a press conference CCPO said that Jundallah was also involved in attacks on Gulistan-i-Johar Police station, Awari Hotel, Core Commander and PACC. The criminals including Murtaza Arif Shakeel, Muhammad Shakib Faroqi Arif Adil, Murad Shah Arif Farhan Mota and Wazir Muhammad Arif Shakir were arrested from Hawks Bay Road, 500 Quarters on Saturday night. The terrorist were tracked down with the help of their Cell-phone Sim and a bomb was also found from their information. The terrorist also admitted that a bomb in Shadman was to be used to target a Aalim.
CCPO also said that fool proof security arrangements were made for Ashura procession
Posted by Chief Editor at 11:56 PM No comments: Links to this post