Zardari, Altaf on the same page against militancy 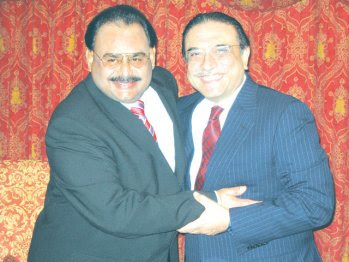 President Asif Ali Zardari and Muttahida Qaumi Movement (MQM) chief Altaf Hussain held an important meeting at Churchill Hotel in London on Sunday.
During the meeting, both the leaders discussed country’s security situation in general and of Karachi in particular. On the occasion, Altaf Hussain expressed his party’s reservations regarding some police officers of Sindh following violence in Karachi, a private TV channel, quoting sources close to the meeting, said.
Talking to newsmen after the meeting, Altaf Hussain said Talibanisation is a threat to Pakistan and it’s a conspiracy to break up the country. “We have to rise above party politics and join hands to meet this challenge,” he added.
He said there was a consensus in the meeting that militancy will be elimiated at every cost. He said law-enforcement agencies are working to crush Talibanisation. He regretted that Taliban had not surrendered their arms after the implementation of Nizam-e-Adl in Swat Valley.
He said situation in Balochistan is very critical. “We have to demonstrate unity to help our Balochi brethren.”
Responding to a question, Altaf said, “Nawaz Sharif should also be taken on board. I respect Nawaz Sharif’s reservations but the country at the moment needs unity and the PML-N Chief should support the government."
According to sources, CCPO Karachi Waseem Ahmed has also arrived in London.
Sensing the gravity of the challenges the country is currently confronted with, President Zardari and Altaf Hussain renewed their commitment to jointly take the country out of the crisis.
Posted by Chief Editor at 4:41 PM No comments: Links to this post