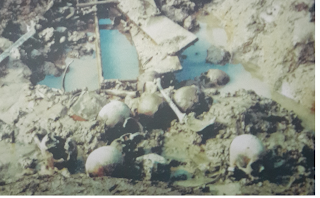 
The horrifying massacre at the hands of Japanese carried out on innocent Chinese and using various tools to kill mass scale men, women and children were revealed to a group of foreign correspondents who visited Changchun and Harbin cities located in northeast of China recently.


On the outskirts of Harbin, the Japanese Imperial forces established notorious Unit 731, the clandestine facilities comprising gas chambers, biological units, insinuators and special room where living human organs were chopped off mercilessly through saw and knives for medical research before throwing the bodies in burning chamber, Professor Jin Chengmin, Curator of the Museum of War Crime Evidence by Japanese Army Unit 731 said.


Unit 731 was a top-secret biological and chemical warfare research base established in Harbin in 1935: the nerve center of Japan's biological warfare in China and Southeast Asia during WWII, according to Prof. Jin having 25-year research experience under his belt.


He said that the retreating Japanese invaders blew up the base and infrastructure including hug housing, boiler units and other facilities when the Soviet Union army took Harbin in 1945.

Early in the 20th century, the Japanese militarists flagrantly flouted the international convention, and clandestinely plotted a biological and chemical warfare in an attempt to realize the political ambition of dominating Asia and ultimately ruling the world.


Very quickly, such weapons were used in battlefield, making the Japanese militarists the most vicious, fascist, war criminal in human history, the journalists were told.


The Manchurian unit 731, which was entrenched in Ping Fang district, Harbine for 13 years was the nerve-centre of the Japanese militarists in executing the plot. Not only they conducted big scale germ weapons research, tests and production here, but also they used healthy human to conduct germ tests.


Forgetting about the history could mean betrayal. By exposing the criminal past of the Unit 731 China wants to preserve the fact in order to warn future generation. Let the history usher in peaceful, civilized and progress human society, and prevent recurrence of the historical tragedy.


Earlier in Changchun, the capital and the largest city of Jilin province Mu Zhanyi the curator of the Jilin Provincial Achieve briefed the journalists and shown archives comprising photos, letters and telephonic conversations of the Japanese soldiers.