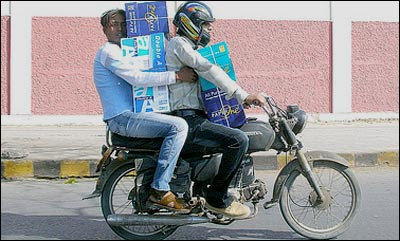 KARACHI: While the city police have arrested and penalised at least 4,100 motorcyclists since the Sindh home department clamped a ban on pillion-riding on Nov 30 last year, the restriction has become irksome for the general public as it has been placed by the authorities without citing any justification for it in the relevant notification.
The provincial home department had extended the ban on pillion-riding under Section 144 of the Criminal Procedure Code for 40 days beginning on Jan 11.
According to a home department notification, any violation of this order shall attract penal action under Section 188 of the Pakistan Penal Code. The ban would remain in place till Feb 19, it stated, adding that all the SHOs had been directed to take action against violators strictly in accordance with the relevant laws.
A pillion-riding ban was initially clamped after riots broke out in Karachi in November, and it has been extended for a third time. Security organisations staff, women, senior citizens and journalists are exempt from this ban.
Sources said that as many as 4,090 people were booked and arrested in around 1,558 FIRs registered against them under Section 188 of the PPC for violating the ban during the past 50 days.
Section 188 of the PPC says that whoever, knowing that by an order promulgated by a public servant lawfully empowered him to promulgate such order, disobeys such direction may be punished with imprisonment of either description for a term which may extend to six months or with a fine which may extend to Rs1,000 or with both.
The sources said that 2,253 offenders were booked in 803 FIRs under the relevant section for violating the pillion-riding ban in the south police zone, 1,169 booked in 440 FIRS in east zone and 678 motorcyclists were booked and arrested for the offence in 315 FIRs in the west police zone.
The capital city police chief, Wasim Ahmed, told Dawn that the police department had requested the home department for an extension in the pillion-riding ban for controlling the crime and maintaining law and order in the city.
'The overall rate of street crime has since declined,' he said, adding that pillion-riding always helped criminals and terrorists.
Justifying the ban, the CCPO said there was a sharp decrease in the incidence of carjacking due to the restriction on pillion-riding. 'In September, 20 cars were taken away on an average daily and the number dropped to some 9.8 in December,' he added.
Answering a question, the city police chief conceded that no known criminal or terrorist was among those arrested for violating the ban on pillion-riding.
'Criminals and terrorists have eventually stopped riding pillion on motorcycles following the ban,' he added.
Meanwhile, sources said the restriction on pillion-riding had caused a great deal of inconvenience to the public.
They said the arrested violators were produced before the deputy district officer, revenue, of the respective town, who had magisterial powers.
The sources said the DDOs were giving maximum relief to violators ordering their release on bail either against a surety of Rs5,000 or a personal bond.
They said the lawyers appearing on behalf of the violators were charging at least Rs2,000 for taking up a case before the EDOs.
A DDO, who did not wish to be named, said that a large number of cases registered under Section 188 for violating the pillion riding ban were pending disposal as the police did not submit the final charge-sheet against accused persons.
He said he had decided over 90 cases and a similar number was pending disposal as charge-sheets were not submitted by the police.
He said he only fined the violators and did not sentence any of them to a term in jail. 'They are not criminals and they deserve to be given maximum favour,' he said.
On the other hand, a number of victims told Dawn that they were initially asked by the policemen to grease their palms if they did not want the registration of cases against them.
'They (police) asked me to give Rs2,000 if I did not want to be booked in the FIR,' said a victim, who wished not to be named for obvious reasons. He said the policemen told him that in case of registration of an FIR against him, he would have to spend much more money to get released from court.
Despite repeated attempts, the provincial home secretary could not be contacted for comments.
Posted by Chief Editor at 5:40 PM No comments: Links to this post