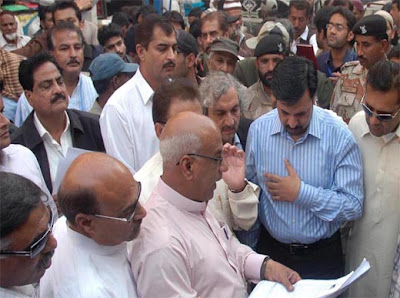 City Nazim Syed Mustafa Kamal has said that the repair and restoration of arson hit 9 markets of Boulton Market has been 40 percent completed and the commercial activities in these markets would resume within a week. ABAD (Association of Builders & Developers) has also initiated construction of a damaged building comprising 400 shops and ware houses with its own resources. All efforts are being taken to rehabilitate the affected traders in their own shops as soon as possible.

He expressed these views during a visit to Boulton Market and other arson hit markets of the area. He also met with the affected traders and contractors of city government and water board. The traders appreciated the efforts of Nazim Karachi for their early rehabilitation. They said that these extraordinary efforts have assured them of their soon rehabilitation.

Nazim Karachi on this occasion said that without waiting for the government aid, being the City Nazim I have started repair and restoration of damaged and gutted buildings and shops of M.A Jinnah Road and already 40 percent of work has been done while rest of work will also be completed soon. He said that the citizens of Karachi were working on the rehabilitation of arson affected business community on self help basis. I salute all those who have contributed in the relief fund or taking part in the restoration activities.

City Nazim said that at this stage it was not possible to assess the exact loss suffered by the main commercial center of Karachi. However, the affectees had desired to get back their shops in original state and the buildings were made business able. On their request we did not wait for even a day and just started repair work on all those buildings that had been handed over to us by the KBCA. Already 40 percent of this work has been completed. The reconstruction of dangerous and razed buildings has also been started.

Nazim Karachi also appreciated the national spirit of city government contractors who had taken up the repair and restoration of 9 affected buildings. He said that they have responded well to the appeal to do something for their city and country. He said that city government has been doing all this despite of facing acute monetary crisis.
Posted by Chief Editor at 11:35 PM No comments: Links to this post