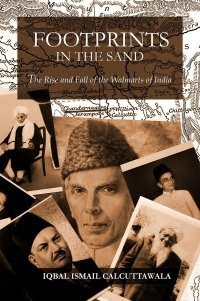 Mr lqbal Ismail’s Book “Foot Prints In the Sand- Rise and Fall of Walmarts of India” to be launched at Avari Karachi on friday March 5, 2010.

In his book Mr. Iqbal Ismail Calcuttawala, chairman of Ace Securities writes about the history of Bantva Community and the role of his family members in strengthening the economy of Pakistan.

Between the segments of history there lies an element of an autobiography of him, in which he narrates the role of Memons in Economic Development of Pakistan. The book is clad with memories and garlanded with pictures of Economic Heroes of the past.
The book also pictures him with notable personalities including Mr. Aga Khan, Former Pakistani Presidents Pervez Musharraf and Late Mr. Ayub Khan.

His achievements and details about his role in the Arag acquisition of Dentogene Laboratories, Albert David, Premier Bank, English Biscuit Factory - EBM and Pak Bank is well documented in the book.

The book is set to launch in grandeur style at Avari Towers Karachi on 5th of March 2010. Abdul Razzaq Yakoob Owner of ARY Group will be the chief guest of the book launching ceremony, Mr. Arif Habib will preside over the ceremony.

The author Mr. Iqbal Ismail was educated at Pittsburgh University. He served at Arag Industries for 5 years, as the Director of Finance. After that he was made the head of Gillanders. Mr. Iqbal Ismail is married with five children and lives in Karachi.
Posted by Chief Editor at 8:37 AM Links to this post