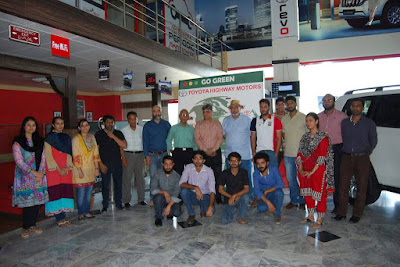 Prominent members of cricketing community have come out to make Karachi green and joined hands with Toyota Highway Motors in planting trees in a bid to check growing environmental pollution to some extent.

Noted cricketers like Pakistan's most successful outgoing captain Misbah-ul-Haq, spin magician of his time, Iqbal Qasim, former Test opener, Sadiq Mohammed, former Test all-rounder Ejaz Faqih, hockey Olympian and 1984 Los Angeles gold medalist, Hasan Sardar, and ex-Junior and a member of 1979 Junior World Cup winning team in France Jan Mohammed, are among the figures who have planted trees to go all out with the slogan one tree each to make Karachi green.

The latest in series of the prominent sportsmen was Jalaluddin, the man who who had the distinction of accomplishing the first hat-trick in One-Day International against Australia at Niaz Stadiim Hyderabad 32 years ago.

The former Test fast bowler and now a highly quailed coach was the guest of honour to plant a tree on May 13. Among other dignitaries to grace the occasion was the veteran journalist Abdul Qadir Qureshi, the Chief Editor of Jumbo Karachi Guide, who had been promoting Go Green cause through his reporting since he was a junior reporter. 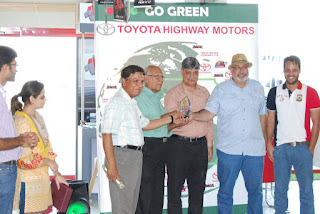 Lack of greenery in this part of the country has been portrayed as a big problem as the governments of today and yesterday showed least interest in developing greenery in the wake of all time high environmental pollution, more specially in Karachi, the world's seventh populous city which is the business hub of the country but far behind in greenery concept.

While other organizations have had limited success to meet national expectations in this regard, Toyota Highway Motors, just a few kilometers from Sohrab Goth (Zero Point) on Super Highway, has come out with the daunting task to share the mission to make Karachi Green and to slightly remove the stigma on this once city of lights.

Having set a target of planting 5,000 trees as initial count for their mission, the company’s CEO Shujaat Sherwani announced that they provide one plant free of cost to each of their car buyer. 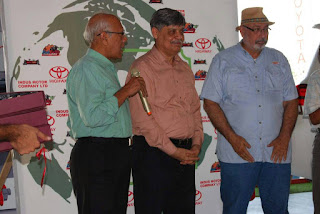 As part of the mission they introduced a unique concept of inviting Pakistan's sports legends to promote the slogan of Green Karachi.

This slogan started with Pakistan's most successful test captain Misbah-ul-Huq who was visibly moved by the idea and highly appreciative of the same while planting a tree along Super Highway, followed by other legends.

With carrying out the mission of this Green Slogan, Shujaat Sherwani extended warm reception to the eminent visitors, also awarding them attractive shields besides paying them tributes for their services and bringing fame and name to Pakistan.

"It has always been my passion to honour sporting legends and be a humble promoter of Go Green and this has doubled my enthusiasm,” he observed in a brief speech on the occasion. Maintaing their tradition officials of the Toyota Highway Motors led by its CEO Shujaat Sherwani, General Manager Sales and Marketing, Shad Ali Khan, Ahsan Sherwani, Manager Sales, Irfan Zaidi, gave a standing ovation to both Jalaluddin and Abdul Qadir Qureshi.

Giving his reaction, Jalaluddin said initially he was reluctant to come for a visit here because of lack of information, but now he was highly impressed with the missionary zeal being exhibited by Shujaat and his team for a noble cause besides extending a true respect to country's legendary figures. 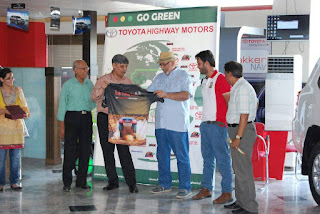 "Go Green is a great concept and our country badly needs to overcome the serious problem of environmental changes which is risking the lives of millions of Karachiites. I am highly impressed to see lots of trees having been planted already,” he complimented.

He described it a great mission and said that the one-car-one-tree was certainly a unique and novel idea to promote the cause.

He said that he felt himself proud for planting a tree here and he will come again to see his plant having grown as a big tree consuming pollution to some extent.

Shujaat Shewani appreciated the services rendered by Abdul Qadir Qureshi in the domain of journalism through his positive reporting skills and regretted that presently positivity was on the way to extinction with negativity having taken strong roots.

The veteran journalist, in his speech, enlightened the gathering by sharing his experiences, particularly those related to coverage of various Presidents and Prime Ministers during their visits abroad.

On the occasion, Shujaat Sherwani presented a Max Dirt Track official shirt to Jalaluddin which is designed to promote newly developed world class track in Hub on Sindh-Balochistan borders. He recalled that Captain of 2009 World T20 winning team Younis Khan also attended the Max Dirt Rally and took a round of track and complimented the organizers for promoting this popular sport.
Posted by Chief Editor at 4:41 PM Links to this post

The Commissioner Karachi, Shoaib Ahmed Siddiqui, has acknowledged that a vibrant media plays a significant role in highlighting the issues of public importance helping the authorities in solving them.

He made the observation while talking to a delegation of APP Employees Union (CBA) Sindh, led by its President Ehsan Qureshi, who called on the Commissioner on May 23.

Shoaib Siddiqui recognized the contribution of the Associated Press of Pakistan (APP), the national news agency of the country, in different fields of national life and noted that the men holding its flag have worked with dedication, having kept the national interest foremost while discharging professional duty.

He was informed by the delegation that this is for the first time in the history of the office of Commissioner Karachi that the APP Employees Union's elected office bearers have been granted an audience by the administrative chief of the country’s biggest metropolis.

The Commissioner Karachi offered every possible support for welfare of deceased senior reporters of this organization and assured to extend support and assistance needed for the good cause.

Shoaib Siddiqui, who took over as Commissioner Karachi in April, stated having received big support from the APP and promised to help in raising funds for the late Chief Reporter of APP Karachi, Khushnood Ali Shaikh, who lost his life in a road accident, and Rafi Nasir, another senior reporter who died late last year.

"We will join hands with APP Sindh Union in their endeavours for extending support to the families of the late reporters," he announced while lauding the services of late Khushnood Shaikh and Rafi Nasir in their journalistic career.

On the occasion, Vice President of the Union Arshad Ahmed Khan briefed the Commissioner about the various plans chalked out for the welfare of members of APP Employees Sindh and introducing the annual awards for them. He also spoke about the plans for holding a reunion of retired APP staffers.. 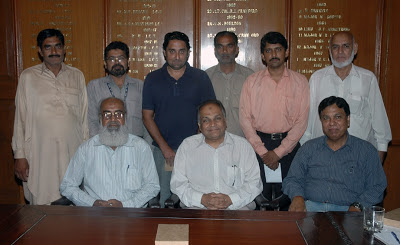 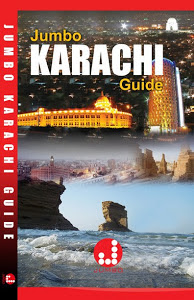 The Chancellor of the Sir Syed University of Engineering & Technology (SSUET), Karachi, Engr Mohammad Adil Usman, who is also the President of the Aligarh Muslim University Old Boys Association (AMUOBA), has appreciated the high quality of books produced by Jumbo Infomedia and Jumbo Publishing.

Engr Adil Usman, a great grandson of the legendary Maulana Mohammad Ali Jauhar, was presented a copy of Jumbo Karachi Guide by its Chief Editor, Abdul Qadir Qureshi, while authors Ehsan Qureshi and Syed Khalid Mahmood presented their latest sports books to the SSUET Chancellor at his chamber on April 27.

The soft-spoken Engr Adil Usman, who studied at the historic Aligarh Muslim University, reckoned that the literary and cultural activities were vital in the development of a nation and such initiatives merit recognition. 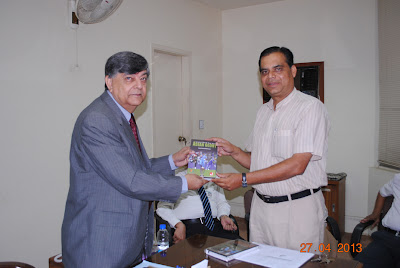 He went through the various chapters of Jumbo Karachi Guide and considered it as a very useful and handy book worthy to be presented to the visiting dignitaries. He praised Abdul Qadir Qureshi for putting together so much information between its covers.

The SSUET Chancellor was also impressed with Ehsan Qureshi’s recently published ‘Mohali Mystery’ while he lauded Syed Khalid Mahmood on authoring ‘Reflections’ and ‘Asian Glory’ which were presented to him on the occasion.
Posted by Chief Editor at 11:38 AM 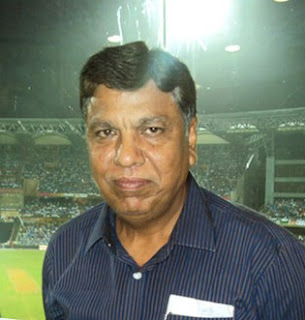 A senior journalist and a former Joint Secretary of the Karachi Press Club, Ehsan Qureshi, was elected President while Abdul Sattar Qureshi, a senior IT Engineer at Hyderabad Bureau, and Arshad Ahmed Khan, a reporter, were elected as General Secretary and Vice-President of the Union respectively.
Mohammad Anwar (Joint Secretary), Syed Fahim Haider (Treasurer) and Mohammad Siddiq (Press Secretary) won their respective seats as the Unity Panel bagged as many as 13 slots out of 14.

The eight-member Governing Body was also elected and it comprised of Mohammad Toheed Siddiqi, Mohammad Saleem Qadir, Syed Abbas Mehdi, Mohammad Zahid, Farhan Khan, Mashooq Ali Chandio, Shoaib Qamar and Mohammad Saleem. All of them contested the elections from the platform of the Unity Panel.

The elections were conducted by a two-member election committee featuring Sattar Javed and Kafeel Ahmed in Karachi and they were assisted by senior journalist Yaseen Rahi at APP's Hyderabad Bureau.

Addressing the employees, the President-elect, Ehsan Qureshi, congratulated the members on the revival of the union and said the newly elected body will protect their genuine grievances and rights across the Sindh province.

He recognized the younger lot of elected members for their dedication and spirit in the revival of the union and thanked everyone for reposing their confidence in the newly elected body.