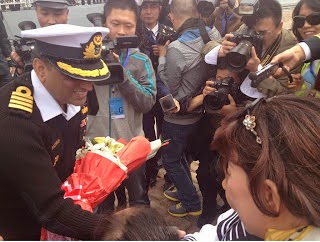 The frigate will take part along with other seven countries vessels at the 14th annual meeting of the Western Pacific Naval Symposium (WPNS), starting from April 22, media report said.

“ has done an excellent work organizing this international event. I am looking forward to meeting fellow navies and learning from them," the China Daily quoted Captain Rashid Zafar Cheema, commander of ’s Navy frigate Shamsheer.

has been invited to attend as one of the three observers of the event, reports the paper.

The Chief of the Naval Staff Admiral Muhammad Asif Sandila was due in Qiangdao on April 21 while officials from embassy including Naval Attaché were already there. A reception has also been planned onboard PNS Shamsheer on April 22.

To begin with, Commander-in-Chief of PLAN Admiral Wu Shengli will first to visit Pakistani ship that illustrates the close relationship between the navies of the two countries, informed sources said.

"Our ship was built in . Every time I sail in I feel like I am sailing in my home waters,” Captain Cheema observed

The vessels from countries, including , , and , were set to participate in a drill on April 24 to celebrate the 65th anniversary of PLAN.