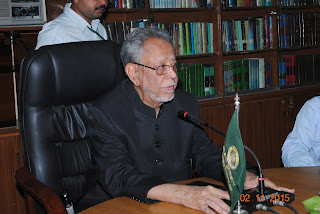 The newly elected President of the Aligarh Muslim University Old Boys Association (AMUOBA), Jawaid Anwar, on November 2, took over as the new Chancellor of the Sir Syed University of Engineering and Technology (SSUET), Karachi, replacing Engr Adil Usman who lost to him in the AMUOBA elections held on October 31.

In his first address to the faculty members and senior AMUOBA members in the university’s conference room, Chancellor Jawaid Anwar vowed to carry the SSUET to continuous improvement with the cooperation of every one.

“We have to move forward without looking back at the drawbacks as it will not serve any purpose,” he stated.

The Chancellor emphasized upon every one to show performance if they want to carry the university ahead towards cherished goals and said that it would be possible only with the cooperation of every one here support of whom is imperative.

Jawaid Anwar pointed out that there are lot of working opportunities and what was needed is only to effectively exploit them. 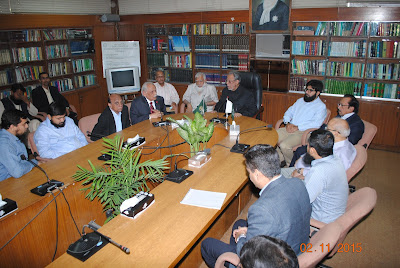 He made it clear that politicking will not find any space as this only weakened the organizations while our effort will be to make the institution stronger.

Earlier welcoming the new Chancellor, SSUET’s Vice Chancellor Prof Dr Jawaid H Rizvi assured full cooperation to the Chancellor in the fulfillment of his mission of taking the university towards meritorious goals and said that continued improvement in the university will be ensured.

The Registrar, Engr Syed Abrar Ali, also welcomed the new Chancellor on behalf of the university and said that he is known to every one as a senior Aligarhian since very long.

He added that with his national and international experience to his credit, the Chancellor Jawaid Anwar will sewe tremendous development.

Jawaid Anwar was elected as President and Muhammad Arshad as General Secretary of the Aligarh Muslim University Old Boys’ Association (AMUOBA) for next three-year term in the Association’s elections held on October 31.

Meanwhile in his remarks after his victory, the newly elected President AMUOBA Jawaid Anwar, who by virtue of this office has also become the Chancellor of the Sir Syed University of Engineering & Technology (SSUET), said: “I am truly glad at this remarkable victory and congratulate each and every Aligarhian at this amazing achievement.”

“I look forward to a fruitful, efficient and highly professional cooperation with all Alig brothers.We need to elevate the status of the AMUOBA and our academic institutions to a level of professionalism. The change has taken place and now is time to deliver,” the President AMUOBA and the Chancellor SSUET declared.

Vice President Muhammad Tariq Sabzwari observed that a new team has come up with a new resolution that will reinforce the Association. Vice President Syed Anwar Ali said institutions must be preferred over the personalities.

“Whatever promise we made, will be redeemed in time and we will never ignore our manifesto”. General Secretary Mohammad Arshad vowed not to turn down the expectations of Alig brothers.
Posted by Chief Editor at 3:08 PM