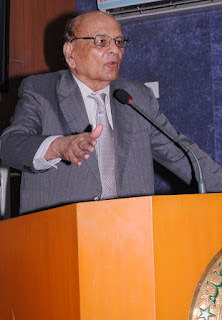 Engr Z A Nizami, a renowned educationist, was re-elected as the President of the Aligarh Muslim University Old Boys Association (AMUOBA). He was once again elected unopposed as President of this august body of Aligarhians for yet another three-year term.

Engr Nizami has continued to be the President of the AMUOBA after Khawaja Waheed and Z H Lari headed the body in the 1960s.

The AMUOBA will be having its fresh elections on September 29 upon the completion of the three-year term of the present office-bearers.

The contest on September 29 will be for the offices of Vice-Presidents for which five candidates are in the field and Honorary General Secretary with two candidates as the contestants.

For the election of 18-member Executive Committee, now there are 23 candidates left in the contest after withdrawal of intending nominees on September 26.

Engr Z.A. Nizami is the Chancellor of the Sir Syed University of Engineering and Technology (SSUET), Karachi, since its establishment in 1993 by virtue of his being the President of the AMUOBA.

Besides the SSUET, the AMUOBA is also running Aligarh Institute of Technology (AIT) which has about a thousand students on roll.