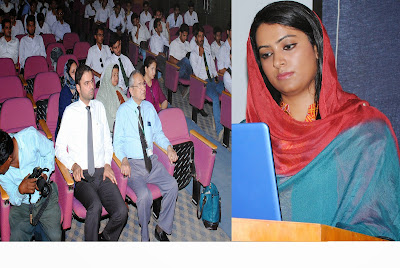 Corruption was described as fundamental cause of our deteriorating economic condition and the National Accountability Bureau (NAB) was assigned with the task of eliminating corruption through a comprehensive approach of Awareness, Prevention and Enforcement.

This was stated by Rabia Abdul Rahman, a NAB Investigation Officer, while speaking at a seminar organized by Sir Syed University of Engineering & Technology (SSUET), Karachi, about awareness and prevention against corruption.

She clarified that there was misconception and ignorance about fact that NAB was not delivering effectively. The impression is not true as the very aim of the Bureau was to demonstrate itself as an effective and transparent anti-corruption agency and meet the challenges thereof.

“It is striving for achievement of assigned goal as part of national duty. To achieve this purpose capacity building training exercises were regularly conducted to improve and enhance the expertise of the NAB officers,” she stated.

Rabia Rahman informed that the NAB had recovered around Rs 258 billion so far and nearly 1770 persons convicted for their involvement in corruption. She described the NAB as a modern, dynamic anti-corruption agency that follows a policy of fair, impartial and across the board accountability.

Cases are inquired/investigated by NAB on pure merit and do not bear any special preferences or prejudices of political victimization against any individual, she added.

Appreciating the role of media to create awareness among the people about corruption, Rabia Rahman said it’s necessary to eliminate corruption of any sort from the society to save yourself and others from the destructive menace.

The seminar, organized by SSUET’s Quality Enhancement Cell, was followed by a question-answer session and the NAB Officers Qamar Abbasi and Rabia Rahman responded to issues raised by the students and others.
Posted by Chief Editor at 10:23 AM