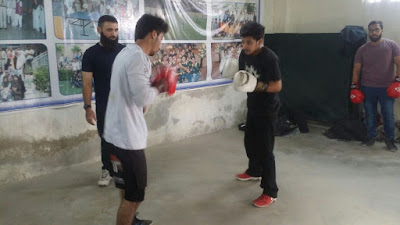 Besides some other sports, the Sir Syed University of Engineering & Technology (SSUET), Karachi, is now raising its boxing team.

According to the SSUET Director Sports, Mubbashir Mukhtar, the work has started on preparing the university's boxing team of eight to 10 members.

So far, he said, 35 students got themselves registered for induction in the team. 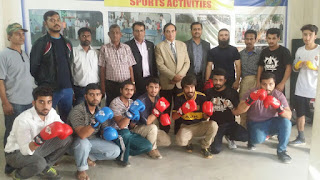 He added that these selectees will undergo training for which a 10-day training camp, planned to be organized at some reputed martial art club in the city.

The trials were conducted under the supervision of boxing coach Nasir Khaleeq and witnessed by the SSUET Registrar, Syed Sarfraz Ali.

Shaheer Khan, the US-based Muslim scientist and a senior Aligarhian, currently on a short visit to Pakistan, was the chief guest at a luncheon hosted by Prof Dr Jawaid H Rizvi, Vice-Chancellor Sir Syed University of Engineering and Technology (SSUET).

He has demonstrated strong synthetic and analytical chemistry background for discovery and development of new products in a multidisciplinary team environment and has an extensive background in organic chemistry with an emphasis on nucleosides/nucleotides and oligonucleotide.

During an interaction with the luncheon participants Shaheer Khan praised the Aligarh Muslim University Old Boys Association (AMUOBA) for its efforts for the establishment of an engineering university after the name of great reformer and educationist Sir Syed Ahmed Khan.

He praised the SSUET founders late Zakir Ali Khan and Z A Nizami who, he observed, steered the AMUOBA towards achievements of cherished objectives in the field of education, particularly engineering.

Shaheer Khan spoke about the AMUOBA like associations elsewhere in the world and expressing his desire to establish associations on the pattern of the Association at Aligarh University and called upon the SSUET's passed out graduates and now living abroad to contact him for the very purpose.

He informed that the preparations have started to celebrate the 200th birth anniversary of Sir Syed Ahmed Khan on October 17, 2017.

As regards his association in US, he said that its functions are attended by people belonging to all religion as they don't allow any political and religious discussions from its forum.

In his remarks on the occasion the Vice-Chancellor, Prof Dr Jawaid H. Rizvi welcomed Shaheer Khan to the SSUET describing him as a proud Aligarhian rendering most important services in the field of science and technology in the US.

He disclosed that during his meeting with him he discussed with him important matter like visiting fellowship, research collaboration, student guidance, post-graduation programme with faculty.

Later the visiting scientist, accompanied by Anwar Ali and Arshad Khan visited the under-construction Sir Syed Tower at M.R. Kiyani Road opposite Arts Council of Pakistan. He praised the AMUOBA for its outstanding projects and said these projects would contribute greatly towards national development as a follow up of the mission of Sir Syed Ahmed Khan.
Posted by Chief Editor at 3:55 PM