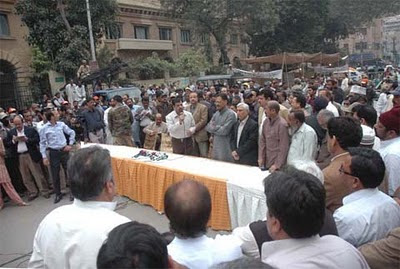 The contractors have employed a work force comprising 1500 people with heavy machinery in the rehabilitation work. Services of civil engineers have also been hired to oversee the work. The number of labor will be increased by 1000 from Monday and the affected buildings will be repaired and restored within next 10 days after that these will be handed over to the owners so that they could restart their business as soon as possible.

The contractors are using heavy machinery of City Government and Saddar Town besides 11 cranes, more than 8 dumper loaders, dozens of trucks and other machinery hired by them. Two separate pools of funds have been set up by the contractors of CDGK and KWSB with a sum of Rs10million in each pool as the initial amount; this amount will be used for purchase of construction material, payment of wages to labor and for other necessary expenditures and will be increased as and when it required. City Nazim Syed Mustafa Kamal has expressed satisfaction over the pace of work.

The contractors will perform the reconstruction and repair works on 24 hour basis and will not take any break before the completion of the task. It has also been decided that the repaired and revamped shop will be handed over to the owner soon after completion of work so that they could restart their business there. On Sunday a total of 1000 bags of cement with 500 trucks of “bajri”and other material was arranged while the welders, carpenters and concerned machinery was also dispatched to the site.

During a visit of the area on Sunday City Nazim Syed Mustafa Kamal expressed satisfaction over the rapid pace of work. He said that we will fulfill our promise made to the affected traders that the restoration and rehabilitation work will be completed within week’s time.

This may be noted that City Nazim has formed a monitoring committee comprising of EDO Works & Services Rasheed Mughal, EDO Municipal Services and M.D KWSB Qutubuddin Shaikh for repair and reconstruction of damaged buildings…
Posted by Chief Editor at 11:22 PM No comments: Links to this post