Hawaii, which used to be one of the topmost tourism destinations, is currently facing its highest unemployment rate ever due to strict stay-at-home orders and a virtual shutdown. 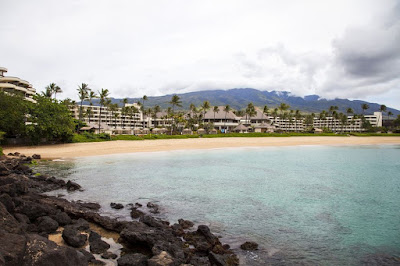 The state's once mighty tourism industry has nosedived already and the residents of Hawaii are under enormous pressure as they begin to run out of their savings to stay afloat.
They are struggling to pay rent and feed their families as unemployment rate has soared from 3% to 34% which is one of the highest in the US.
The coronavirus (COVID-19) has taken its toll here as the workers are being pushed out of their jobs in the absence of the tourists.
"Our life is in danger because, of course, we don't know what will happen. There's no real hope for good things in the future," one of the affected locals bemoaned.
According to reports, around 216,000 of the state's 660,000 workers were employed in jobs supported by tourism in 2019. Airline arrivals to Hawaii have slumped from more than 30,000 passengers per day to 756.
Food service workers, who make up roughly 13% of all employees in the state and earn a median annual income of about $30,000, have lost wages as restaurants closed and hotels shuttered.
Posted by Chief Editor at 8:41 PM

In its efforts to tackling COVID-19 disease, Sindh has been able to increase its laboratory tests further as the health authorities on May 10 declared that another 4,215 people were tested during the last 24 hours, out of which 709 were found positive for the virus.
Sindh has been able to increase its overall number of COVID-19 tests in recent days but it is still behind the Islamabad and Gilgit-Baltistan (GB) with a third position in terms of laboratory tests conducted per million population by provinces and territories of Pakistan.
As of May 10, Sindh has 11,480 confirmed cases out of 91,323 tests in comparison of Punjab having tested 125,988 samples. 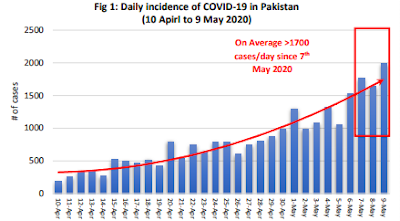 Punjab was fifth in the table of provinces and territories in the context of tests conducted per million while Baluchistan was at third position with 14,374 tests.
According to data compiled by the World Health Organization (WHO), Islamabad Capital Territory (ICT) topped the list of overall lab test /million population with the figure of 9,347, followed by GB (2,766), Sindh (1,819), Balochistan (1,164), Punjab (1,145), Khyber Pakhtoonkhwa (957), Azad Jammu Kashmir (687), while Pakistan overall covered 1,358 per million population.
As of May 4, ICT had covered 6,331 per million, GB had 2,312, Sindh had 1,338, Punjab had 889, Balochistan had 836, Khyber Pakhtoonkhwa had 718 and AJK 551. Pakistan, overall a week back, was testing 1,018 per million.
Keen observers said that number of tests conducted need to be increased further to benefit from the lockdown and various SOPs. 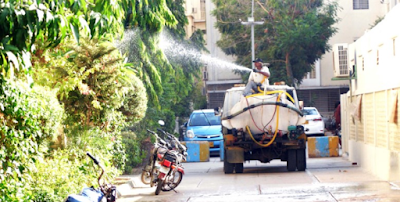 “Our strategy should be testing more and more and then quarantining and treating, which is the only way to fight COVID-19,” an expert observed, adding that at present tests are being used to confirm the obvious cases or more vulnerable population.
In the meantime, another nine COVID-19 patients lost their lives in the province out of which eight, including three women, at Karachi, whose age ranged from 27 to 73 and a 70 year-year-old woman at Hyderabad, taking the tally of fatalities to 189 for the province.
However, official sources did not share the place of deaths, patients’ dates of admissions to hospitals and date of infections.
According to the health department routine summary, 583 new cases were detected in last 24 hours ending at 8 am on May 10, pushing the overall number of infections to 8,634 for the megapolis.
Among other districts it was Hyderabad which reported the maximum 29, followed by Jacobabad (19), Shikarpur (16), Ghotki (12), Sanghar (11), Sukkur (6), Larkana (5), Shaheed Benazirabad (4), Khairpur (3), Jamshoro (3) and Tando Allahyar (2).
As many as 2,081 recovered from the disease, while 1,139 were admitted in hospitals, including 78 in critical condition and 23 on ventilators, and 7,432 were taking the treatment either at their homes or at the designated isolation centres, it was further learnt.
Posted by Chief Editor at 8:39 PM

Betty Wright, the singer-songwriter and producer best known for her 1971 soul-disco classic ‘Clean Up Woman’ died on May 10 at her home in Miami of cancer, the New York Times reported. She was 66. Besides becoming a key player in the Miami funk sound of the ‘70s, she had remained a mainstay on the Billboard R&B chart as a lead singer, duet partner and background vocalist, placing 20 different singles in the R&B Top 40.
She was on the R&B and dance charts until 2007 with ‘Baby’ which was a duet with the contemporary soul singer Angie Stone. She also featured in the R&B classics ‘Let Me Be Your Lovemaker’, ‘Shoorah Shoorah’, and ‘Tonight Is the Night.’
An early starter, she was barely 17 when her most famous hit ‘Clean Up Woman’ was released in 1971. The song reached No. 6 on the Billboard Hot 100 chart, sold more than a million copies and came in as the No. 49 song of 1972, according to Billboard.
Her illustrious career spanned nearly half a century with late ‘70s and early ‘80s being the most successful period. She was known to be an inspiration to many contemporary singers like Mary J Blige and Joss Stone.
Posted by Chief Editor at 8:37 PM

The British Prime Minister, Boris Johnson, while making the announcement of easing restrictions on May 10, has called on people across the country to return to work if they cannot do so from home. 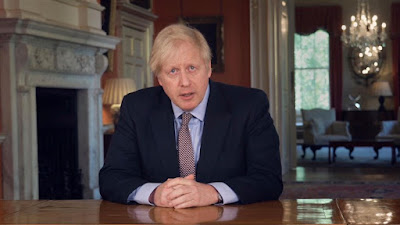 “We now need to stress that anyone who can't work from home, for instance those in construction or manufacturing, should be actively encouraged to go to work," he remarked while sharing his vision for gradually restarting the economy.
In a pre-recorded televised statement, Johnson disclosed a road map to resuming activity in the country following more than six weeks under lockdown.
He considered his plan as a cautious balance between keeping new infections down while easing the economic burden the pandemic has had on millions in the UK.
"From this Wednesday (May 13) we want to encourage people to take more and even unlimited amounts of outdoor exercise. Social distancing measures would stay in place. You can sit in the sun in your local park, you can drive to other destinations, you can even play sports but only with members of your own household," he elaborated.
Posted by Chief Editor at 8:34 PM