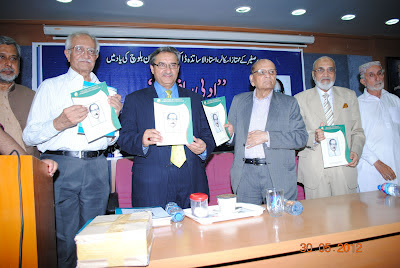 Glowing tributes were paid to noted scholar, educationist and researcher, Dr Nabi Bux Balcuh amidst an announcement for the establishment of Dr Nabi Bux Baluch Chair at Sir Syed University of Engineering and Technology, , and dedication of corners in the libraries of universities and colleges of Sindh .

The announcement for establishment of Chair after the name of Dr Baluch was made by Engr Z A Nizami, Chancellor SSUET, while the Sindh Senior Minister for Education, Pir Mazhar-ul-Huq, announced the decision to dedicate the corners in his name in the libraries of various universities and colleges of the province.

The two important announcements were made at a Literary Reference in memory of Late Dr Nabi Bux Baluch held at Sir Syed University of Engineering and Technology, in collaboration with , and it was largely attended by educationists, scholars, researchers and noted writers.

Besides Pir Mazharul Huq, who was chief guest on the occasion and Chancellor Z.A. Nizami, who presided over, the Reference was addressed, among others, by noted scholar and writer Dr Awaz Ali Shauq.

In his speech on the occasion Pir Mazharul Huq said that Late Dr Baluch was although from Sindh, but he was not merely a Sindh writer but an internationally recognized scholar and educational expert who was imbibed with the spirit.

He recalled that his grand father, Pir Illahi Bux was a politician, yet he used to take academic advices from Dr Baluch and used to follow the same.

Pir Mazhar said that while framing national education policy when the stage of getting Sindh’s input came, he (Pir Mazhar) organized a meeting of educational experts at the residence of Dr Nabi Bux Baluch and he can say without doubt that Dr Baluch played a key role in this regard.

He said it was such a vibrant and practical policy that if implemented, many of our problems being encountered today ca be solved.. He said that Dr Nabi Bux Baluch wanted 7 percent of National GDP to be spent on education which presently is only 1.2 percent.

Referring to a suggestion from Agha Noor Mohammed Pathan, Resident Director Academy of Letters for opening of one room libraries after the name of Dr Nabi Bux Baluch at tehsil level in Sindh , Pir Mazhar said that there is no problem in opening such libraries, but what was required is to create an eagerness of book reading among students .
He noted that many universities and colleges in Sindh did had good libraries but the over the years these were not upgraded.

He said Sindh Education department has prepared a lists of modern books to be purchased for these libraries and it is for the third consecutive year that tendering process for procurement of such books has been undertaken.

In his Presidential remarks, Chancellor SSUET Z.A. Nizami said that Dr Nabi Bux Baluch had very deep association with and he remained on its Board of Governors till his last. He said his decisions in the meetings of Board of Governors proved land mark decisions.

Nizami said that Dr Baluch had acquired his education from and he used to follow Aligarh Spirit and Concept. He disclosed that SSUET has collected most valuable material about the life and achievements of Dr Baluch and will publilsh the same in the form of a book.

He declared that SSUET will have a chair in the name of r Baluch in recognition to his services for the cause of education.

In his address Dr Nawaz Ali Shauq said he learnt a lot from two personalities Dr Nabi Bux Baluch and Pir Hasamuddin Rashdi and this helped him in determining his direction of practical life. He said that Dr Baluch’s works are glorious and he lived an exemplary life without leaving anything which one would consider imperative for a nation to reckon with.

He highlighted his outstanding research on the poetry of Shah Abdul Latif Bhitai and said while other researchers may had collected five written scripts, Dr Baluch collected 50 in a span of 50 years and got published source material which he could collect from anywhere in the world.

Mazharul Siddiqi recalled his close association with Dr Baluch and said thaht when he was a student in , Dr Baluch had then been the head of Department of Education which was established by Allama I.I. Kazi. He said Sindh is greatly indebted to r Baluh for highlighting its history and culture as he used to consider culture as soul of a society. He said he particularly highlighted the the aesthetic aspects of Sindh’s rural life.

He said Dr Baluch institutionalised the respect of teachers in the society and he used to listen to budding students with all intent as he used to say that one could learn even from these growing students. He used to give great importance to human potential.

Earlier Agha Noor Muhammed Pathan, Resident Director Academy of Letters said that besides paying tributes to Dr Baluch there is need to ensure practical implementation of his philosophy.

The function ended with a vote of thanks by leading poet and Convenor of SSUET’s Literary and Cultural Forum, Khumar Farooqi.