Woman cries for justice outside court

KARACHI: Hajra lies half conscious outside a local court. Her eyes are wet and her face betrays wrinkles. She is crying for justice because she was mercilessly widowed and the killers of her husband have escaped justice.

Her hair has prematurely turned white, the fatigue of a long journey has torn her black shoes. “They have escaped prison despite court orders,” the middle-aged women, gripping her head with both hands kept yelling. Hajra is one of the hundreds of women who having been pleading cases of their slain husbands, brothers and sons in courts for years. And even after they win and come close to getting justice their enemies manage to escape prisons due to police negligence. This happened to Hajra on Wednesday. Additional District and Sessions Judge Ubaid Hamza rejected the bail before arrest application of the alleged murderers of her husband. “According to the law, in murder cases, police arrest the accused after the rejection of applications of bail before arrest. However, the accused in the murder case of Rahim Khan, my husband, all the three men (Behraman, Bakht Amin and and Abid) escaped from the premises of the court,” Hajra said. According to a police report, her husband was killed on December 30, 2008 within the jurisdiction of Mominabad Police Station. Hajra had lodged an FIR of her husband’s murder in the police station concerned. She accused the police officials of being accomplices of her enemies. Now that the alleged killers of her husband have escaped the court, she fears for her life. “They are free now and will threaten me again to not pursue the case,” she narrates her sorrow ordeal. “Now that they have escaped arrest, they will kill me,” she says, cursing her fate and the police system. “They are not the police, they are dacoits themselves.”

When asked by the scribe, none of the police officials concerned offered any comments, however, the court officials confirmed that the court rejected the bail application of the accused killers. “Where should I seek justice now,” she asked this scribe, adding that the custodians of her life, the police, have turned out to be her enemies. (Daily Times)
Posted by Chief Editor at 6:22 PM No comments:

Younis Khan excels on pitch of his own choice 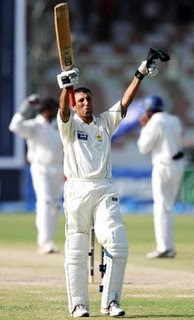 It’s really childish to believe that the newly installed Pakistan captain, Younis Khan, had no say in the preparation of the pitch that very nearly produced a result on the final evening at the National Stadium, Karachi.

Equally bewildering was the statement of the Pakistan coach, Intikhab Alam, at the end of the second day in which he had blasted the curators for preparing a pitch where the Sri Lankans had piled up a huge total.

It’s an open secret that the curators had prepared the pitch in accordance with the guidelines from the Pakistan management that indeed included both Intikhab Alam as well as Younis Khan.

Obviously the home team desired a track that did not assist the spin bowling because Sri Lanka had a couple of great spinners in their folds. They didn’t dare putting their own batsmen to risk by ordering for a lively track with the procession that followed in the third One-day International at the Qaddafi Stadium, Lahore, still at the back of their minds.

When you don’t wish a pitch that doesn’t assist the spinners or fast bowlers then what else are you going to get other than a perfect batting strip. So why blame the ground staff if you yourself are short of confidence. It was Pakistan's first home Test in 16 months and they were not willing to take chances.

Intikhab Alam, it’s generally believed, had a go at the curators at the end of the second day because he was still unsure whether the home batsmen will be able to cope with the pressure after Sri Lanka had posted a mammoth total.

Much to the satisfaction of the home batsmen, the pitch remained as docile on the last three days as it was on the first couple of days. Younis Khan was the major beneficiary, scoring a triple century. He was in fact eyeing Brian Lara’s record of 400 when play began on the final day.

The Pakistan skipper made the most of the favourable batting conditions before being finally dismissed after scoring 313, easily his highest Test score. The Sri Lankan bowlers faced greater embarrassment as wicketkeeper Kamran Akmal slogged them at will. He could have a gone on to score a triple century had the innings not been declared.

Sri Lanka would not have hoped for conceding a first innings lead of 123 after having rattled 644 for 7. Pakistan declared at 765 for 6 and more drama was to follow in the afternoon. The visitors could have become the first team to lose a Test match after having 600 runs in the first innings.

Sri Lanka faced defeat after losing fifth wicket when still in the red. Pakistan were still in with a chance of pushing for a victory but the visitors played out the final overs to earn a draw.

The lackluster captaincy of Mahela Jayawardene passed the impression that he had made a correct decision of giving up the leadership at the end of the tour. He did score a double century in the first innings but his body language in the field was not all that positive and his soft dismissal in the second outing didn’t help the cause of his team either.
Posted by Chief Editor at 5:58 PM No comments: