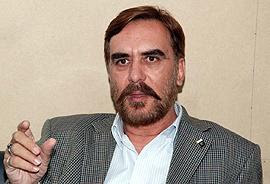 It takes grit, commitment and perseverance to be a man of integrity. To be human and to act human, to be a person who is able to contribute his share for the cause of humanity in letter and spirit, to be a kind soul who feels the pain and unbearably enough to lose control, to be able to help others without any need of worldly glory, to be a person like Ansar Burney.

Everything in this universe is for others: the trees, the rivers and all other beauties of seasons and nature. The trees do not eat up their own fruit, the rivers do not drink their own water; and in the same way ‘selfless people’ like Ansar Burney live for others.

Be it the grave issue of ‘underage child camel jockeys’, the ordeal of ‘Zafran Bibi’ who was involved in a case of rape and sentenced to death by stoning, Murder of Pakistanis in Macedonia – in the name of war against terror, human trafficking of young girls for prostitution, Slavery or the illegal confinements at Guantanamo Bay; Ansar Burney has always stood as an icon of human rights.

Ansar Burney, born on August 14th 1956 at Karachi, he is son of Syed Mukhtar Ahmed Burney, and he was the first man to introduce true human rights in Pakistan a couple of decades ago.

A graduate of Masters and Law from Karachi University and honorary recipient of a PhD. in Philosophy from Sri Lanka, Ansar Burney, Advocate started his noble mission in 1980 by setting up the "Ansar Burney Trust", "Prisoners Aid Society" and "Bureau of Missing and Kidnapped Children/Persons" in Karachi Pakistan.


During his education he was a very prominent student leader, and as such, always raised his voice for justice, human dignity and civil rights. This landed him in a lot of trouble on several occasions with the military government of the time. In 1977, Ansar Burney, then aged 20, was arrested on charges of delivering speeches against Martial Law and favour of Democracy and sentenced for 8 months rigorous imprisonment by the Martial Law Court.

Upon release in 1978, the Martial Law Authorities once again arrested him and sent him to Karachi Prison for 2 more months’ detention. In 1979 he was again arrested for the third time and detained for a month.

During these periods of detention in different Pakistani prisons, Ansar Burney witnessed the miserable conditions of prisons and their prisoners. He met many people who were locked up for years and years without ever having committed a crime; forced into detention with false criminal charges.

That was the time that he decided to help those in need and in 1980-81 after completing his law degree, Ansar Burney, Advocate started working on his project to bring reforms in prisons and get the release of innocent and illegally confined prisoners. He also started working against Slavery and against human trafficking.

The Ansar Burney Trust was set up as a non-governmental, non-political and non-profitable human and civil rights organization. Its main objective was to struggle for the release of innocent persons who were kept in prisons or in mental asylums illegally or without any justification and to create awareness against human trafficking.

As a result of his continued and selfless efforts for the past so many years, Mr. Ansar Burney has so far been able to secure release of more than 750,000 (Seven hundred and fifty thousand) innocent prisoners who were illegally imprisoned in Pakistan and abroad; some released after as much as 50 to 55 years of illegal confinement.

Some were even born in prisons and mental asylums where they grew up and lived as prisoners or patients for 35 to 40 long years of their lives; only released and rehabilitated with their families and society because of the hectic efforts of Ansar Burney and the Ansar Burney Trust. 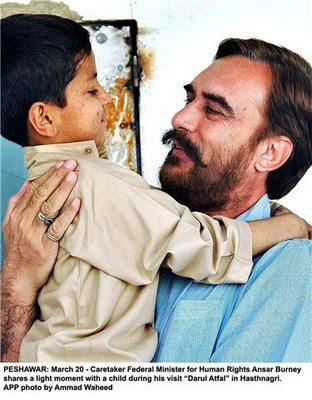 The "Ansar Burney Trust" has also arranged release of around almost 20,000 (twenty thousand) persons from mental asylums and mental wards of prisons. These were not mental cases but were kept in these asylums in inhumane conditions by influential persons due to their own vested interests.

Mr. Burney has also been successful in tracing out around 170,000 (one hundred and seventy thousand) children through his Bureau of Missing Persons who were safely delivered to their families. These include children who were set free from bounded labor camps, underage child camel jockeys and young girls who had been sold away or trafficked for prostitution.

Once established, the Ansar Burney Trust also started their struggle to fight against the inhumane and degrading treatment of women in Pakistan and abroad. With a purpose to bring those who abused women to justice, Ansar Burney has fought several cases for the cause of women’s rights and one of the success stories has been the closure of several women “mandis” (like animal markets for the sale of girls) in Pakistan. 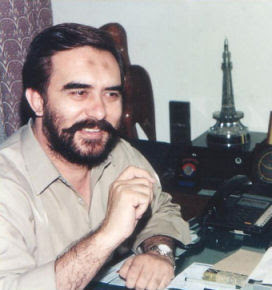 Mr. Burney has also sent/taken humanitarian aid to different parts of Pakistan as well abroad. During the drought in Pakistan, Mr. Burney personally visited several affected areas and supervised the humanitarian aid operation to the region by the ABT.

In occasions this process, Ansar Burney stumbled upon the use of Hindu “Haris” (Bonded Labourers) as slaves in the interior Sindh Province of Pakistan. After some hectic efforts and persistence, the Trust was successful in freeing around 7,000 “Haris”; a 160 of who in danger of being attacked by their previous owners were taken in by the Trust and relocated to a more secure location.

Currently, Ansar Burney and the Ansar Burney Trust have been working round the clock to put a stop to the smuggling and trafficking of children and young girls and their use as camel jockeys and prostitution in the Middle East, to date, a 1100 children some as young as 3 years to 12 years of age have been released from camps in the UAE alone.

In 1984, the Chief Martial Law Administrator of Pakistan, General Mohammed Zia-ul-Haque, twice offered Mr. Burney the position of Federal Minister of Pakistan; an offer Mr. Burney refused in order to stay impartial and unaffiliated and to continue his human rights work without any political reservations or activities. Since then he has on several been offered ministerial and political positions but has refused, re-emphasizing the Trust’s nature as a truly independent and non-political organization. However, he took charge as Federal Minister for Human rights in the non-political interim set-up in 2007. On November 16, 2007, Ansar Burney was sworn in as Pakistani Federal Minister for Human Rights - to head the newly established Human Rights Ministry of Pakistan, first such Ministry in the history of Pakistan. He managed the Human Rights Ministry with a sense of duty and great passion..

However, positive attention is not all Mr. Burney has received. His work has resulted in the making of many enemies. He has been attacked several times and continually receives death threats. His name is on the "Terrorist Hit List" which was leaked into newspapers from Pakistani Intelligence Agencies. Ansar Burney Trust offices have been attacked and employees killed. Members of the Burney family have also been attacked and severely injured.

Ambulances of the Trust have been fired upon, burnt and stoned by persons against whom Mr. Burney has fought human rights cases. The attacks continue to this day...

On 23rd March 2002, he was conferred with Pakistan’s National Civil Award "Sitar-i-Imtiaz", the first national award in the history of Pakistan in the field of human rights. Ansar Burney was officially declared an 'Anti-Human Trafficking Hero' in 2005 “ by the United States, State Department. Ansar Burney, in March 2008, elected as Member / Expert Advisor in the United Nations Human Rights Council Advisory Committee at Geneva, one out of 18 elected from throughout the world.

Whenever a natural calamity such as earthquake or flood hits Pakistan, ‘Ansar Burney Trust’ is there to lend a helping hand. Ansar Burney and his wife Shaheen Burney take pride in helping others. They derive pleasure by sharing smiles and restoring honor and dignity to downtrodden people.

Mr. Ansar Burney, Advocate got married with Shaheen on May 28, 1981 and they have three children Fahad Burney, Raheel Burney and daughter Sana Burney.

As pakistani we are proud that we have Ansar Burney in Pakistan.
Posted by Chief Editor at 4:00 PM No comments: Links to this post

Email ThisBlogThis!Share to TwitterShare to FacebookShare to Pinterest
Labels: Ansar Burney, Who is who in Karachi
Older Posts Home
Subscribe to: Posts (Atom)