An exhibition volleyball match marking the International Day of Sports for Development and Peace was played between Sir Syed University of Engineering and Technology (SSUET) and the University of Karachi at the SSUET campus on April 6.
In what turned out to be a one sided contest, SSUET emerged victorious in straight sets with the scores 25-14, 25-18 and 26-24.

The SSUET captain Asif alongwith Humayon, Sohail, Azadar and Hatim outclassed the opponents. KU's Anus and Ammar offered some resistance to but they were unable to change the complexion of the match.

Shahid Masood, Joint Secretary, Pakistan Volleyball Federation, and Secretary Sindh Volleyball Association, was the chief guest on the occasion and he appreciated the efforts of SSUET in promoting the sports.

At the end, Shahid Masood, alongwith the SSUET Registrar, Syed Sarfraz Ali, and the SSUET Director Sports, Mubashir Mukhtar, distributed the prizes and souvenirs to both the teams.

A large number of faculty members, staff and students from both the universities witnessed the match.
Posted by Chief Editor at 3:22 PM Links to this post 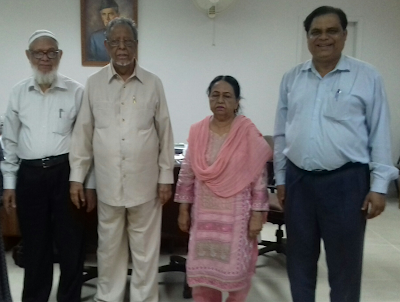 Jawaid Anwar, Chancellor, Sir Syed University of Engineering and Technology (SSUET), Karachi, warmly welcomed Prof Dr Ghani-ul-Akram Sabzwari and Prof Dr Nasim Fatima, two of the most prolific library science scholars of the country, who called on him at the campus on April 6.

The SSUET Chancellor wholeheartedly congratulated the duo for their accomplishments in the field of library science, particularly their contribution in running the Library Promotion Bureau (LPB) for more than 50 years.

“You have done an exceptional service to the nation. Your scholastic brilliance has inspired and motivated a lot of people of various generations. You have not only enriched the arena of library science but you have also made a significant contribution to Urdu literature. Your achievements merit wider recognition,” the Chancellor complimented.

“It’s really marvelous that you have continued working with missionary zeal without caring for the support from the other stakeholders. That should be the spirit. We should do our best without waiting for others to do it. You have proved your selflessness by devoting your life to the cause of the profession without being materialistic at any stage,” Chancellor Jawaid Anwar added. 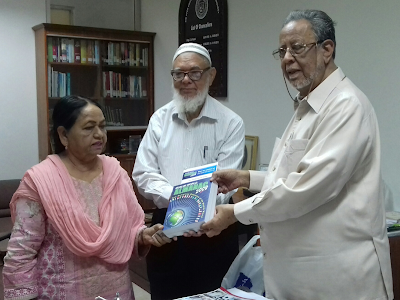 Prof Dr Ghani-ul-Akram Sabzwari and Prof Dr Nasim Fatima presented copies of their latest books to the SSUET Chancellor who gifted them a copy of his iconic publication ‘Muslim World Almanac’ to both the learned guests.

The Chancellor shared the programmes being held in connection with the 200th birth anniversary of the legendary Sir Syed Ahmed Khan which is being celebrated during the current year by the Aligarh Muslim University Old Boys Association (AMUOBA) of which he is the President.

Both the distinguished scholars appreciated the vision of the AMUOBA and they conveyed their best wishes for the success of the ongoing programmes aimed at educating the present generation about the monumental role of Sir Syed Ahmed Khan in the reawakening of Muslims of South Asia.

“A lot has been written on Sir Syed over the years. But we need to keep reminding the youth in particular about the various aspects of his personality. More books should be published to highlight his contributions and the electronic and digital media should also be used for spreading the word,” they reckoned.

The meeting was also attended by Arshad Khan, Secretary General, AMUOBA, and Dr Amna Khatoon, a member of Executive Committee of the Pakistan Library Association (PLA), Sindh Chapter.
Posted by Chief Editor at 3:15 PM Links to this post