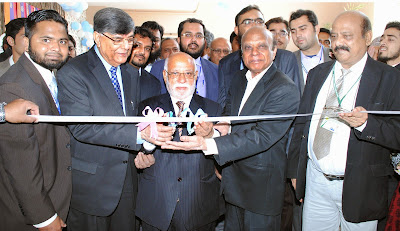 Over 120 innovative projects produced by the final year students of Computer, Electronics, Civil, Telecom and Bio-Medical Engineering and Computer Science departments were put on display at the Open House Job Fair 2015 held at the Sir Syed University of Engineering and Technology (SSUET), Karachi, on February 14.

The fair was inaugurated by noted industrialist Sardar Yasin Malik and largely attended, among others, by prominent industrialists, businessmen, corporate professionals and dignitaries.
Speaking on the occasion Sardar Yasin Malik lavished high praise for the SSUET, observing that the university was producing high quality professionals whose skills and expertise was appreciated even outside Pakistan.

“Particularly Biomedical engineers of Sir Syed University have earned a name in the Middle East countries,” he reckoned.

In his discourse, the SSUET Chancellor, Engr Mohammad Adil Usman observed that the Open House Job Fairs reflect the result of students’ four-year education, their skills and experience in a tangible form as the final year projects show how creatively charged students successfully transform their innovative ideas and concepts into cost-effective commercially viable products.

The university, he pointed out, provides a research-friendly environment and encourages students to come up with new ideas by holding Open House Job Fairs to promote their scientific achievements.

“Open House Job Fair provides an opportunity for students to have a direct inter-action with a large number of employers, who specifically explore talented graduating students for employment in their reputed organizations and often take advantage of an open house as an initial screening process when they have several open positions to fill”.

Chancellor Adil Usman advised the students to compose compact resume, short in length and long in quality, to create a good first impression which counted a lot.

“You have to be confident with positive attitude to break into the organizations seeking talent,” he stated.

Earlier the Registrar, Engr Syed Abrar Ali, in his opening remarks pointed out that the SSUET is being run on non-profit basis by Aligarians and it lays great emphasis on practical and professional know-how with strict adherence to character building and career planning. Dr Bilal Alvi, Chairman Electronic Engineering Department, delivered the welcome address, while Prof Dr S M Makhdumi, Dean of Engineering, presented vote of thanks. 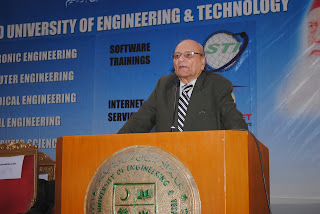 The Orientation Ceremony for newly admitted students of Batch 2012 was held at Sir Syed University of Engineering and Technology (SSUET) was held on January 23 thus heralding the start of new academic session.

The students have been admitted to Computer, Electronics, Civil, Bio-Medical and Telecommunication disciplines of engineering and Computer Science after a long process which involved written test and interviews.

Addressing the ceremony as chief guest, Sardar Yasin Malik, a former Federal Minister and ex-Chairman state-owned PSO, told the new students that to become a successful man in their future is in their own hands as they can gain success by sheer hard work and not the luck.

He particularly advised the female students, who have been admitted to the university in a relatively large number this year, not to sit at their homes after graduation and do some part time works even after they are married or else it would amount to  national loss.

He paid glowing tributes to Chancellor Z.A. Nizami for his dedication and commitment to the cause of this university established as the biggest engineering university in the private sector and its students.

Sardar Yasin Malik observed that today the newly admitted students must be very happy for starting a new chapter of their life, but their parents must be having mixed feelings as now-a-days it is not (not) easy to study in a university or college or school even.

He noted that after graduation many students go abroad for further studies but not many return to their country which is a loss to the country and their parents as well.

Similarly many girls become engineers after graduation but instead of yielding any benefits to the nation they start performing home responsibilities - a national loss which Pakistan cannot afford.

Recalling his past during which he studied in schools in areas like Kharadar and Lyari, lived in a small house which was devoid of electricity, slept on footpaths and studied under pole lamps and conveyed a message to students that anyone can achieve anything in the world provided he/she accepts the challenge.

“If a boy of a newspaper hawker ca achieve an elated position after having graduated from this university, then you people, who enjoy better opportunities, cannot achieve their desired goals”.

He told them that Islam is their basis and they will become successful if they would follow the teachings of Islam and Holy Prophet Muhammed (SAW). 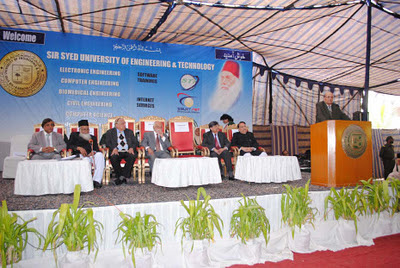 Earlier, Chancellor Z.A. Nizami, who presided over the ceremony, complimented Sardar Yasin Malik for his unwavering commitment to the cause of education and particularly this very university and its students.

He quoted Mr Yasin Malik having said that no student should be deprived of education merely for his/her financial constraints.

Engr Nizami said that today SSUET has become the biggest center of engineering excellence in the private sector having collaboration with over a dozen foreign universities.

“We at SSUET follow the traditions of great reformer and educationist, Sir Syed Ahmed Khan and established this university after him 96 years after his death”.

Engr Nizami said that Sir Syed Ahmed Khan wanted the students to have Quran on one side and science and technology on other side of the shoulder. “We at this university wants the same from our students”, he emphasized.

On the occasion the Chancellor made a special mention of world’s youngest Microsoft Certified Professional Late Arfaa Karim and said that she had her elementary education from this university.

In his address the Vice-Chancellor Prof. Dr Saiyed Nazir Ahmed called upon the students to understand the difference between the university, college and school education and said that they will emerge successful in their life if they would dedicate themselves towards acquiring knowledge and gaining results during their 4 year stay here and will be successful in their future career.

He told them that as students of this university, they would enjoy the brotherhood of Alagarhians Associations and SSUET Old Boys Associations world over.He advised them to be punctual and ensure to attend classes regularly. He pointed out that in foreign universities students lacking 100 percent attendance are dropped.

Earlier Registrar SSUET Shah Mahmood Hussain Syed, said that this university is fifferent from other universities as personality of students here is groomed besides imparting of knowledge to them.

The stress was also laid on students to have grasp over English which would be the language of communication at the university.