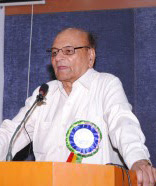 Speakers belonging to various walks of life paid rich tributes to the late SSUET Chancellor, Engr Z.A. Nizami, for his services and highlighted various facets of his life as a world class town planner, educationist and as a friend of the less privileged.

The condolence meeting, organized by the Sir Syed University of Engineering and Technology (SSUET), Karachi, with the collaboration of the Aligarh Muslim University Old Boys Association (AMUOBA) of which he was the President, was held at the Convocation Ground of the Aligarh Institute of Technology (AIT).

Gen Moinuddin Haider remarked that the name of Engr Nizami will always be remembered because of the services he had rendered for the development of Karachi and specially the establishment of an engineering university of international standard.

He pointed out that after the creation of Pakistan, the Aligarhians with their talent and vision steered Pakistan to the path of progress and name of Engr Nizami will remain on the top.

The former Sindh Governor recalled Engr Nizami’s meetings with him for the acquisition of 200 acres of land where he wanted to establish bigger SSUET’s campus.

He called for continued growth of the tree planted by Engr Nizami for propagation of engineering education so that the university could continue to meet the ever changing world standards in various fields of engineering.

Prof Dr Waqar recalled that late Engr Nizami always used to invite him speak on Sir Syed Day and Iqbal Day which used to be observed every year without a break by the AMUOBA.

He said he didn’t find any match of Engr Nizami in administrative affairs which he demonstrated when he developed this city as DG KDA and proved himself as the world’s best Town Planner. He said his life was full with continuous struggle.

Pirzada Qasim Raza Siddiqi, recalled Engr Nizami’s association with his father and later with him and said he is the one for whom condolence meetings are being organized by scores of organizations across Pakistan highlighting his vision, greatness and various facets of his fascinating life.

He said that Engr Nizami always kept even those, who were not Aligarhians but possessed natural Aligarhian spirit, along with him for the accomplishment of his vision. He was the one who always thought about carrying the youth forward and establishment of SSUET was a step towards the said direction.

Pirzada Qasim reckoned that Engr Nizami was rich with Aligarh spirit and establishment of this university in the private sector was his major achievement of life – an achievement which will never allow us to forget him ever. He said he was a man of positive attitude so much so he always helped in the establishment of institutions like Delhi College and School and Hamdard University.

In his speech the SSUET Chancellor and the AMUOBA President, Engr Adil Usman,  recalled his old association with Engr Nizami and said throughout his life he worked with all dedication. He said he along with late Zakir Ali Khan steered AMUOBA to dynamic functioning and it was he who managed the allotment of plot on which AIT and SSUET are functioning today.

He said that despite his falling health, would never miss to come to the university. He never accepted defeat from life and kept working till his death. Although today he is not among us but has become part of history.

He vowed that now the responsibility has been entrusted to him and he will make unabated efforts to accomplish the mission undertaken by late Engr Nizami and expand this university to provide best education to students.

Senior Aligarhian Ali Zafar Afridi described Engr Nizami, an epoch-making personality and said that although today he is not among us but his name will remain immortal on the pages of history.

He said that Engr Nizami was a man with dimensional personality having far sighted vision and speedy decision making capability.

He pointed out that the university established by him had so far produced over 10,000 engineers in various engineering disciplines and they are proving their feat in various countries of the world.

Vice-Chancellor Prof Dr Jawaid Rizvi said that Engr Nizami was the founding spirit behind the establishment of AIT and SSUET and this university which started with an enrolment of 200 students today has over 6000 students.

He said that Engr Nizami’s services for the cause of education will always be remembers and his popularity can be judged from the fact that he remained President of AMUOBA for seven terms and Chancellor of the University since 1994 till his death. He said the discipline which is witnessed in this university is because of him.

Registrar Shah Mahmood said that the dynamism of Engr Nizami and his love for SSUET was reflective from his presence at the 16thConvocation of the University which he attended despite serious illness and physical weakness.

He said that it was unbelievable of him that he attended the SSUET 14th Convocation a couple of years back despite having received the news about the death of his spouse in Washington just a night before and he did not allow the grief to show up on his face until the convocation ended and he left for his home.

Dr Tafuiq Ahmed Nizami said that he and members of Nizami family are not prepared to believe that he has left the world, but we have to bow our heads before the will of Allah.

He said the way the people from various walks of life have spoken so high about him is a matter of solace for us.

Khumar Farooqi said that throughout his life Engr Nizami took care of the less privileged mortals and if on one hand he allotted plots to builders for city’s development, he established big housing colonies where poor were allotted houses at negligible prices.

Farrukh Nizami said they always saw their “papa” at work and which ever organization he worked in, he led it to success. He said he always provided jobs to needy and never made any one jobless in his career and that was why he was paid tributes to employees of KDA even after 25 years from retirement.

Earlier Muhammed Umer Khan, a university student paid glowing tributes to their late Chancellor and described him as Sir Syed Saani”. He said he was a great benefactor of students of this university.

Another student recited the naat “Mustafa Jaane-Rehmat pe lakho salam”, a naat which will make Engr Nizami to drown into deep thought. The meeting concluded with Dua-e-Maghfirat for the departed soul. 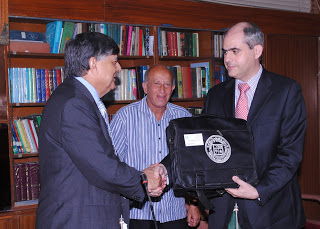 The Sir Syed University of Engineering and Technology (SSUET), , and the University of Malaga, Spain, have agreed in principle to have collaboration between the two institutions for Masters and PhD programs besides exchange of students and faculty members in various disciplines of engineering.

The agreement was reached at a meeting held between Chancellor SSUET, Engr Adil Usman, and Dr Javier Poncela, a visiting Professor from the reputed , at the SSUET on April 17.

During the wide-ranging discussion Dr Javier sought collaboration between the two universities with the focus on research and development.

After having visited the facilities available at the SSUET he was of the opinion that collaboration between the two institutions will be of mutual benefit, particularly for PhD programmes and exchange of students and faculties. He also spoke about assessing the possibilities of undertaking joint research programmes.

In his remarks the SSUET Chancellor, Engr Adil Usman, stated that their university looked forward for the collaboration in higher engineering courses, Masters and PhD, observing  that they will soon evolve a system for working with the Malaga University.

The SSUET Vice-Chancellor, Dr Jawaid Rizvi, added that the university will welcome such collaboration as far as possible and would further discuss faculty exchange in particular as well as Masters and PhD programmes.

Registrar Shah Mahmood Hussain Syed informed the participants of the meeting that the SSUET already has collaboration with many US and universities and would like to have the same relationship with as well.

He said the two sided should identify some concrete steps to achieve the objective and sign MoU for the purpose and to make the collaboration effective.

Later, the two sides went into another session to discuss and sort out technical details for the proposed collaboration.On the occasion the Chancellor presented the SSUET’s traditional souvenir

Sir Syed Tower to be built in heart of Karachi 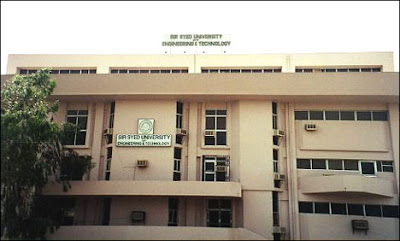 The Chancellor of the Sir Syed University of Engineering and Technology (SSUET), , Engr Adil Usman, has announced to start the work on the projects visualized by his late predecessor, Engr Z A Nizami, during his lifetime.

He made the announcement at the condolence meeting for Engr Z A Nizami organised by SSUET in collaboration with the Aligarh Muslim University Old Boys Association (AMUOBA) and the Aligarh Institute of Technology (AIT) at the university's convocation ground.

Engr Adil Usman, who is also the President of the AMUOBA, revealed that the foundation stone of 8-floor IT Tower at the SSUET will be laid soon while the work on the Sir Syed Tower at M R Kiyani Road will also start soon after the availability of funds.

He further said that the work on the IT Park and the SSUET's larger campus to be spread over 200 acres of land acquired by Engr Nizami for the university in ‘Education City’ will also start soon.

He declared that a memorial monument of the late Engr Z A Nizami will also be constructed at SSUET.