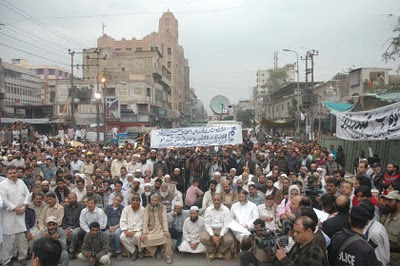 Registered contractors of CDGK and KWSB have announced to participate in the rehabilitation process of arson hit business community by starting repair and reconstruction work of 22 gutted buildings located in an area from Light House to Boulton Market from Sunday.

Earlier City Nazim said that the repair work of affected buildings will be performed not in months but within weeks and all the affectees will be rehabilitated in their original shops so that they could restart their business there. He said that we could not afford any delay in this work. He also appealed to the administration of private schools in Karachi to exempt the fees of the children of affected traders for at least next 6 months, adding that city government will itself pay their fees if they did not do so.

City Nazim said that national flag should be hoisted on all the affected buildings as a symbol of harmony. He said that the incident was anticipated as the enemy was trying to destroy the economic hub of Pakistan but we will not surrender.
Nazim Karachi further said that the affected traders have lost all of their life long earning in the incident and now we have set up our preferences for their rehabilitation. Initially the repair and reconstruction of shops has been taken on and for this purpose I would ask the contractors of CDGK and KWSB to give some sacrifice for their city and country. They have been invited here so that they could themselves see the huge damage and take part in the rehabilitation process. He said that the nation today needs us. The rehabilitation work has been initiated on war footing basis. City Government will also have its share in this process. He said that from now on all attention should be given to the rehabilitation of affected traders.