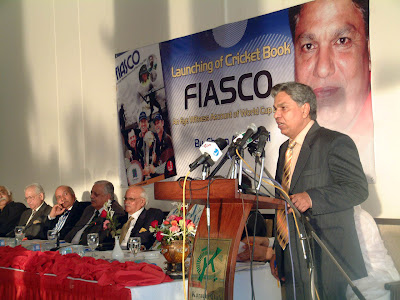 By Mohammad Nazakat Ali
Ehsan Qureshi’s masterpiece by the name of Fiasco was launched at the picturesque Karachi Club Annexe on the evening of February 20. What a wonderful setting it was and even more glittering was the presence of Pakistan’s cricket luminaries.
There could not have been a better venue for the launching of such a wonderful book. Although the day had been unusually hot by February standards there was plenty of cool breeze in the banquet hall of the Karachi Club Annexe when the ceremony started about an hour before the sunset.
Fiasco: An Eyewitness Account of World Cup 2007 is presented in hardbound and there are 272 pages between covers. It’s sixth book to be authored by Ehsan Qureshi, working as the Senior Sports Reporter at the Associated Press of Pakistan (APP) for the past couple of decades.
Fiasco contains many untold stories about the mega event in which Pakistan crashed and coach Bob Woolmer died under mysterious circumstances has been published by Jumbo Publishing and its priced Pak Rs 800. 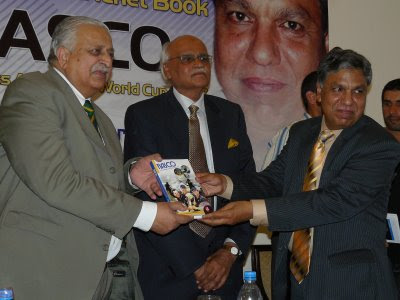 Federal Sports Minister, Pir Aftab Hussain Shah Jilani, who was the chief guest in the launching ceremony, demanded an apology from Jamaican Police for mental torture, trauma and embarrassment caused to the Pakistanis in the alleged Bob Woolmer murder case.
“The Jamaican Police had gone overboard with their investigations and they should not have treated the Pakistan cricketers and journalists as suspects. The then officials of PCB did not handle the situation properly which allowed the Jamaican Police to act freely,” the Federal Minister believed.
Pir Aftab Jilani, himself a former cricketer, spoke at length about the issues of the game and assured the governmental support to the present PCB setup headed by Ijaz Butt, whom he considered a committed and energetic administrator.
The Minister disclosed that he had been stunned to learn some of the facts that have been brought to light by Ehsan Qureshi in his book. He lauded the efforts of the author for coming up with an excellent publication.
The Chairman of the PCB, Ijaz Butt, who presided over the ceremony, did not throw light on the World Cup 2007 but he commended the author for having done a fabulous job.
He reckoned that the journalists and authors producing books should be encouraged by the PCB as well as government and private sector. 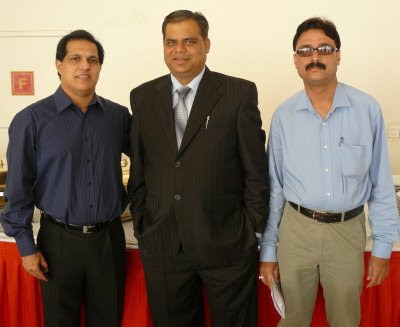 The Pakistan Captain Younis Khan, who was a part of the World Cup 2007 team in Caribbean, hoped that the national team would be performing better and their goal was to win the 2011 World Cup.
The Pakistan coach Intikhab Alam showered Ehsan Qureshi with praise for producing his fourth book on the World Cup and sixth overall.
The Group Sports Editor, Jang Group of Newspapers, Gul Hameed Bhatti, was of the opinion that such books are of great historical value and Ehsan Qureshi’s contribution needs to be acknowledged.
Ehsan Qureshi, in his speech, talked about the distress caused to him and his family by the screening of the footage by BBC in their programme Panaroma in which he and fellow journalist Abdul Majid Bhatti were shown as the last persons to have met Bob Woolmer before his death.
Seniors journalist Abdul Qadir Qureshi, who is also the mentor of Ehsan Qureshi, presented the vote of thanks. The ceremony was conducted in his vintage style by the famous anchor Sardar Khan.
The Sindh Sports Minister, Dr.Muhammad Ali Shah, Pakistan’s vice captain Misbah-ul-Haq, ex-captain Shoaib Malik, Danish Kaneria, Faisal Iqbal, former cricketers Waqar Hasan, Mushtaq Muhammad, Aaqib Javed, Shoaib Muhammad, Iqbal Qasim, Yawar Saeed, Salahuddin Ahmed, Abdul Raquib, hockey Olympian Islahuddin Siddiqui, KCCA Vice Presidents, Ajmal Ansari and Nadeem Omar were also present on the occasion.
There was a large turnout of the media professionals as well. The duo of A Aziz Rehmatullah and Haji Abdul Razzaq, who had launched the Cricket World Quarterly in late 1970s, was very much there as was Riaz Ahmed Mansuri, who brought out the famous magazine The Cricketer Pakistan.
Posted by Chief Editor at 1:44 PM No comments: Links to this post