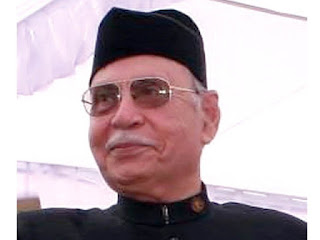 Rich tributes were paid to the late General Secretary of Aligarh Muslim University Old Boys Association (AMUOBA), Engr Mohammad Zakir Ali Khan, on the occasion of his fourth death anniversary observed by the Association at the Sir Syed University of Engineering and Technology SSUET), Karachi.

Eminent speakers, on the occasion, highlighted the educational and literary services of Zakir Ali Khan, particularly his contribution towards the advancement of Sir Syed’s Mission.

In his thought-provoking discourse, the SSUET Chancellor and the AMUOBA President, Jawaid Anwar, while recalling the services of Zakir Ali Khan, said that in any society the freedom of expression plays a positive role towards promotion of healthy trends.

“The true opinion-making among the human beings is very much connected to their independent thinking,” he stated.

“We at AMUOBA desire to write down a new chapter at Sir Syed University through educational advancement to be achieved through developmental activities.”

He described Zakir Aki Khan as a multi-faceted person, particularly in the field of Urdu literature in recognition of which he was awarded ‘International Award for Literature’ by the Aligarh Muslim University.

He particularly referred to Zakir’s most famous book ‘Riwayat-e-Aligarh’ and said it is a valuable gift for Aligarhians and students as well as a reflection of his character and personality.

“It is a very informative truly reflecting the traditions of Aligarh culture and an important source for character building of students.”

The Chancellor told the gathering that the University’s present setup is all out for the welfare of its employees and announced that they soon will be given benefits including medical insurance and revised pay scales.

Pointing out that a number of welfare measures have been taken in a short span of four months, the services of around 150 adhoc employees were regularized and due promotions given to deserving employees besides completing the new E Block named after the Late Z A Nizami while it has been proposed to name Block F after Zakir Ali Khan.

Chancellor Jawaid Anwar said that admission process has been completed smoothly and new and old entrants were pursuing university’s discipline.

According to him the gap between two important sections of Quality Enhancement Cell (QEC) and Faculty is being bridged through reorganization measures.

Earlier in his speech the AMUOBA’s General Secretary Mohammed Arshad Khan said that a sad phase of our society was that due recognition is not given to personalities in their lifetime.

He stated that Zakir Ali Khan was the true benefactor of the Association and his services for AMUOBA and SSUET will go down in its history with golden letters.

In his speech the Vice-Chancellor Hamdard University Prof Dr Abdul Mannan remarked that Zakir Ali Khan was binding force for the entire Aligarhin community and kept them jointed through his unmatched behavior and literary works.

Noted journalist and writer Mahmood Shaam that every soul departing from us takes away his bright phase. Previously it was an era of independence but now the mass of slaves was on the rise.

He said that Pakistan would not have come into being if there would not have been Sir Syed Ahmed Khan and it was unfortunate that we failed to maintain traditions and their continuation, adding that Zakir Ali Khan was the one who had command over urdu and presented the conditions around in a fascinating manner.

Noted writer and researcher Khawaja Razi Hyder described Zakir Ali Khan a best writer of his era who had the ability to make people realize what used to be just information and his writings had a deep rooted appeal for the new generation in relation to their character building and wanted to see a bright future for them.

The daughter-in-law of Late Zakir Ali Khan said that he was a most affectionate person and from day one he never allowed her to feel that she came to in-laws after leaving her home.
Posted by Chief Editor at 2:48 PM