Govt can take action against Musharraf by invoking Article 6: Aitzaz 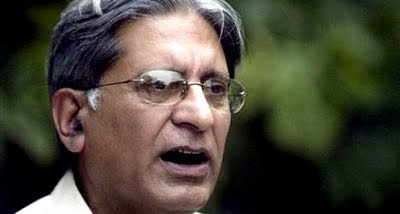 Former President Supreme Court Bar Association (SCBA), Aitzaz Ahsan has said that the government can take action against Pervez Musharraf by invoking Ariticle-6 of the constitution, saying he (Musharraf) was a coward person.

Addressing in Karachi City Court on Saturday and later talking to media, Aitzaz Ahsan said that the former President had played a role regarding to remove evidences in murder of Benazir Bhutto and Karsaz tragedy.

He said that its up to court to give punishment to former President Pervez Musharraf.

Praising the role of media in the movement for the restoration of the judiciary, Former President Supreme Court Bar Association (SCBA), Aitzaz Ahsan has urged lawyers’ fraternity to change thinking of people by following principles to be based on non-violence.

Addressing in Karachi City Court on Saturday, Chaudhary Aitzaz Ahsan said that after the start of historical lawyers movement, the people had started to see a dream of welfare state and lawyers objectives to be achieved when Pakistan to become as a welfare state.

He said that July 20 was a historical day but a dictator had arrested 60 judges and suspended the constitution, saying Pervez Musharraf had taken decision whatever he wanted but the denial of CJ Iftikhar Muhammad Chaudhary had changed Pakistan’s scenario.

According to Aitzaz, it was the lawyers’ movement which created hope of Pakistan to be a welfare state, adding, all institutions of the country were following Musharraf’s orders and Musharraf were making laws on his choice.

Paying tributes of martyrs of May 12 incident, Aitzaz Ahsan said that it has brought revolution in Pakistan and people who were responsible for violence now writing letters to the Chief Justice of Pakistan.

Mentioning the sacrifices rendered by Karachi lawyers, the former President SCBA said that lawyers belonging to Karachi rendered most sacrifices and they had traveled from miles away to the capital in the long march, saying the struggle by Karachi’s lawyers had guaranteed the success of the movement.

Commending the role of media, Aitzaz Ahsan said that the media played an important role for the independence of the judiciary, adding media men and lawyers are inevitable for each other and urged journalists to support lawyers in achieving their objectives, adding out of 17,000 lawyers in Lahore, only 10 or 15 following violence.

The veteran lawyer specially mentioned the services of cameramen who with their heavy equipments covered long marches and rallies in scorching heat.

He said that lawyers in small number involved in violence do not represent the lawyers’ community.
Posted by Chief Editor at 8:06 PM No comments: