NEPRA may take control of KESC 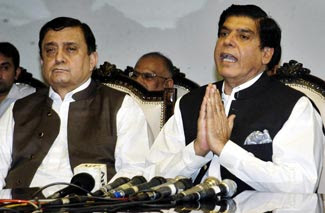 The power tariff will be inflated by Rs 3 when the government withdraws the subsidy on electricity in line with a commitment between Pakistan and the International Monetary Fund (IMF), Federal Water and Power Minister Raja Pervaiz Ashraf said on Saturday.

Replying to questions at a press conference, the minister said the average electricity generation cost was Rs 8.37 per unit and the average selling price was Rs 5.37 per unit – the difference translates into the subsidy provided by the government, which would be withdrawn to fulfil the commitment with the IMF. But he did not provide a specific date for the likely increase.

He said the National Electric Power Regulatory Authority (NEPRA) would take over the management of the Karachi Electric Supply Company (KESC) if there was no improvement in efficiency in the supply of power. He said NEPRA had already served a show-cause notice on the KESC, and in case the company failed to satisfy government, legal action would be taken. “This includes taking over management control of the company if we are unable to de-privatise it [KESC],” he said, adding that Karachi was the industrial hub of the country, and the government wanted to ensure a smooth supply of power to the port city.

Ashraf said the Water and Power Ministry had rejected several proposals by NEPRA on increasing the power tariff. “The power tariff is not the top issue for the government … the administration is making all-out efforts to eliminate load shedding from by December,” he said.

He said the government had already cleared more than half of the circular debt, and hoped that the remaining Rs 70 billion would be paid soon.

The minister lamented that some political leaders were making “irrelevant statements” on the power crisis. He said the government was committed to overcoming the problem on “war footing”.

He claimed that the defeat of the Pakistan Muslim League-Quaid in the general elections of 2008 was a result of severe load shedding in the country during the party’s tenure.

The minister also lamented the propagation of the 1994 independent power providers’ policy (IPP), and said it had driven investors away.

Ashraf said the minister had formed a committee on power crisis, which met daily to monitor the situation.
Posted by Chief Editor at 9:30 PM No comments: Links to this post