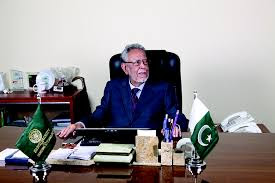 Ever since the present management led by Chancellor Jawaid Anwar, who is also the President of Aligarh Muslim University Old Boys Association (AMUOBA) has taken over its leadership, the Sir Syed University of Engineering and Technology (SSUET) has taken, on a positive note, many issues as a challenge.

To begin with, according to the progress report 2016-17, issued by AMUOBA, a strategic plan with corrective measures to address the challenges was delivered on stringent timelines. The salient features of the plan included the establishment of Quality Enhancement Cell, establishment of the office of Research, Innovation and Commercialization (ORIC) with a monetary grant from the European Union, revamping of Center of Guidance Counseling and Career Planning/Placement (CGCCPP), establishment of postgraduate studies Directorate, signing of MoUs at national and international levels, HEC and Foreign Funded projects.

Keeping in view the last year's experience, where the issuance of merit list was delayed for two months as the admission test date was September 20, 2015 while the result date was November 20, 2015.

"We have tried our level best to overcome this issue and hence the result of aptitude test was declared on time", the report said.

Determined efforts have been made to ensure transparency at all levels, says Chancellor Jawaid Anwar as per progress report.

According to him, over the past year, since he took over, the mentioned efforts have already reflected on different forums as the Charter Inspection and Evaluation Committee (CIEC), Government of Sindh, Steering Committee raising the university's rank to Number One Private Engineering University of Sindh.

Another feat achieved was bringing the Campus on Cloud envisaging a campus management with system rich functionality in a highly secure solution with a stunning user interface, covering the complete student lifecycle, CoC automates the admissions, Academics and Finance operations across the campus, departments and Programs of the Aligarh Institute of Technology (AIT) was being deployed at the university.
Posted by Chief Editor at 3:54 PM Links to this post