Spread over 1200 acre of land, the University of Karachi was established through the parliament as a Federal University in 1951. However, through another act of the parliament in 1962 its status was redefined as university of the province of Sindh. On 23rd October, 1950 the Karachi University Act was passed and after an amendment in 1951 it was enacted and Prof A.B.A Haleem was appointed as its first Vice Chancellor. For the first two years, the University of Karachi remained as an examination University for the affiliated colleges. In the year 1953 it started its teaching and research activities at two Faculties of Arts and Science. Opened with an initial intake of 50 students, the university is now a sprawling structure of 53 Departments and 20 world class and highly reputable Research Centers and Institutes, under eight faculties of Arts, science Islamic Studies Pharmacy Commerce & Business Administration, Law, Education and Medicine. At present the enrolment of a regular student at the Campus is slightly over 24,000. There are about 700 teachers and more than 2500 supporting staff. 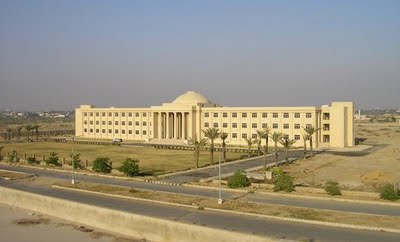 
Moreover the atmosphere of the congested and polluted area was not conducive to higher education and research. Thus a plot a of a1279 acres of land was acquired on the Country Club Road (now University Road). On 18th January 1960 the university was shifted to the new campus. Thus began a new phase in the life of the university. The day is still commemorated by various old students’ Association and the University administration jointly.

The Karachi University today is the biggest university of in the country. It comprises eight faculties with which all the colleges of the city are affiliated B.S, M.S, M.Phil and Ph.D classes under five of these faculties Arts, Science, Pharmacy, Commerce and Islamic Learning are conducted on the campus, while under the Faculties of Medicine, law and Education it examines the students admitted to their affiliated colleges. Research programmers leading to M.Phil and Ph.D Degree are offered under all the faculties.

Other Institutes are Dr. Punjwani Centre for Molecular Medicines and Drug Research, Khan Institutes if Biotechnology and Genetic Engineering, Dr Afzal Hussain Qadri Biological Research Centre, which is a common research facility for all the biological science departments; the Marine Resources Collection and Research Centre, which is the biggest repository of marine life from the Arabian Sea. National Nematological Research Centre, which undertakes research in plant pest control. Centre of Excellence in Marine Biology, a federally founded centre for the study of marine fauna of the Arabian Sea; the Institute of Environmental Studies, Institute of Molecular Genetics and Umair Basha Institute of Information Technology which is going to become operational after up gradation of the present department of Computer Science.

It is noteworthy that the number of M.Phil/Ph.D in science produced by the Karachi University far exceeds the number produced in any other university of the country. So far, about 600 M.Phil, 300 Ph.D, 7 D.Sc and 7 D.Litt. degrees in Science have been awarded by the university. The University teachers are also involved in various research projects and contribute regularly to publications of home and abroad. Only in 2006 the number of published research papers by the reaching and research faculty of the university is 506.


Library
The library of the university is one of the largest libraries in the country. Housed in spacious building, it has a collection of 360,000 books, and 110,000 copies of national and foreign journals and periodicals.

There is also a microfilm section which has copies of rare manuscripts from the British museum, the India Office Library and the Bodleian and Cambridge University libraries.

A highlight of the library is the Quaid-i-Azam’s personal collection of books, many of which carry his own signature. Copies of the All India Muslim League papers are also available. Work is in progress for setting up a resource centre, equipped with internet and scanner microfiche. Now the Central Library is being gradually digitalized and will be able to cater the larger number of students. The LEJ National Science Centre is the most significant addition to the Karachi University which is a recent development.

The centre not only houses one of the largest digital one libraries of the mechanism and capacity to assist other campus library by resources and provide leadership in the application of technology to help the researchers, scientists, scholars and students of academic and R&D institutions of Pakistan Facilities of video conferencing are available and fully operative. Beside the central library, every department also has its own seminar library equipped with the necessary books.

The University of Karachi introduced the Evening program in 195 to provide an opportunity to the in service peoples and professionals to pursue higher education in the evening initially at a few departments The program started while gradually the number of departments offering degree courses in the evening has increased.
Four Year Degree Program: The latest development this year is the introduction of four year degree program at the University to bring the university education at par with the International standards. In the revised curricula of four years program a number of new subject have been added to enable the passed out students to have wider opportunities in the job market.

The University of Karachi witnessed a new era of speedy developments in all spheres when Dr. Ishrat Ul Ebad Khan took over as Governor of Sindh and Chancellor of the universities in the province. His deep personal interest and commitments in the university affairs is an ongoing source of continued interest in academic, research and managements activates at the intellectual growth at the campus.

The University has now embraced upon a gigantic process of multifaceted progress with emphasis on capacity building and quality enchantment. Ever since its inception, it is in this era that constitutional and statutory bodies of the university are holding their meeting with regular intervals, further bolstering the process.

Regular holding of Selection Boards has enabled the University to add more than two hundred new teachers to various faculties and departments in 2006 07. Many departments in faculties of science and Arts where strengthened by modernizing facilities recently to enhance their quality and productivity.

These include Departments of Physics, Chemistry, Statistics Food Science and Technology, Biotechnology, Computer Science and Mass Communications. For common facilities for science in various scientific disciplines a centralized science lab has been established. It has further enhanced the capabilities for scientific research. Some noteworthy developments which serve as land marks in the university include a highly sophisticated and well equipped Herbarium for research in plant science.

Already completed Botanical Garden is first of its kind in the country. The Garden adds plenty of beauty to the campus on the one hand while on the other it serves as an open lab for the Plant scientists.

Construction of hostels for the visiting faculty and research scholars and additional facilities for M.Phil/Ph.D scholars, have further enhanced chances for quality and speedy research. The perennial residential problems at the campus is also expected to solve partially with the completion of new blocks of the staff apartments.

All these and many other successes were due to active encouragements the university received from the Higher Education Commission and the Chancellor of the University.

A number of new developments projects are on the anvil while many others are at various stages of completion. The University is now moving fast on the path of developments playing its due role in the national development.
Posted by Chief Editor at 4:47 PM 1 comment: Links to this post