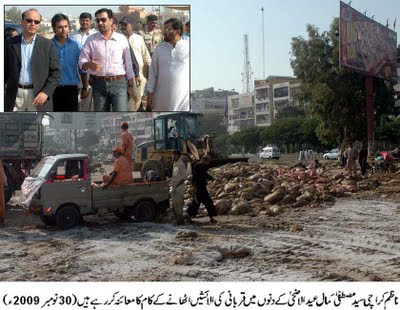 City Nazim Syed Mustafa Kamal has directed concerned department of city government and all towns and union council’s administration to change the lifting and disposal of offal operation into cleanliness campaign in the city by using the same manpower, machinery and other resources so that the remaining effects of the insanitary conditions due sacrifice of millions of animals during Eid-ul-Azha could be removed completely. He said that the operation for the lifting of offal was still not completed and it will carry on till the full and thorough cleaning of the city.

He expressed satisfaction over the performance of all staff and officers of city government, towns & union council’s administration for taking part in the successful operation. He said that the concerned officials have played a dynamic role in the timely lifting and burial of offal and they did not go to their home till the disposal of all offal in the city.

Nazim Karachi said that this year none of the offal was dumped at the landfill sites because the city government had already managed for the burial of offal of all cantonments and areas controlled by other agencies. During the operation over 2 thousand complaints were received at 1339 which has been resolved within ten minutes.

He said that he himself with DCO Karachi spent all three days of Eid-ul-Azha on roads and streets while overseeing the whole operation. All town nazims, union nazims and elected representatives performed excellently which had given best of results this year too.

The City Nazim said that he also went to Lyari and other suburban and rural areas of the city during the operation and inspected the conditions in the katchi abadies. He said that special attention has been given to rural and backward areas, peoples are best judges, every town has been provided with necessary manpower, vehicles and machinery whenever it required.

He also thanked citizens of Karachi for providing help and cooperation in the swift lifting and disposal of offal during all three days of Eid-ul-Azha and said that operation was still not completed and will continue till the completion of cleaning work.
Posted by Chief Editor at 8:36 PM No comments: Links to this post