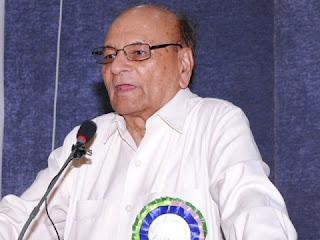 The outstanding and unmatched services rendered by Engr ZA Nizami, particularly in the establishment of first-ever engineering university in the private sector named after the great reformer and educationist Sir Syed Ahmed Khan and development of Karachi as a real metropolis, would not be forgotten for all the times to come.

"The book titled ‘The Journey Through Islamic Structure’ compiled by the late Engr Nizami is an asset not only for the present but also the coming generations, specially benefiting the engineering students for a long period."

This was stated by the Chancellor of the Sir Syed University of Engineering and Technology (SSUET), Jawaid Anwar, on the occasion of launching of the book at a grand ceremony held at KDA Officer's Club.

The Chancellor said that Engr Nizami, who was the first Chancellor of SSUET, pursued the missionary vision of Sir Syed Ahmed Khan and laid the base of the traditions and values of the SSUET and its present administration was striving to improve the educational standard on the same principals.

He pointed out that the Aligarh Muslim University served as a laboratory which produced great people, history-making persons, technocrats and scholars.

Speaking on the occasion, former Federal Minister Haji Hanif Tayyab, recalled the services of the late Nizami and said that he was the one who started Karachi's development with the launch of on 36 projects while he was Director General of Karachi Development Authority (KDA). These projects, besides development of the city, led to creation of job opportunities for score of educated youth and also provided opportunities to poor and talented students for higher education.

Engr Anwer Ali, Convenor, Aligarh Institute of Technology (AIT), described late Engr Nizami a person having fear of Allah and possessed a great sense of self-confidence. He was a world class Town Planner and it was for this reason that Saudi Government once invited him to seek benefit out of his experience and skills for use in the expansion project of Holy Kaaba.

He said that his services will always be remembers particularly in the expansion and development of Karachi while he played the key role in the establishment of the SSUET.

Recounting the life of Engr Z A Nizami, a former Provincial Minister Dost Muhammad Faizi said that he had great regard for traditions and desire for serving the poor recalling that during his tenure as DG KDA he used to extend loan from KDA fund to meet the financial demands of Sindh Government while now the same KDA was seeking funds for paying salaries of its employees.

He transformed a department into a big development organization and provided low cost plots for residential facilities to citizens apart from parks, sports grounds, prayer places and educational institutions.

The grand function was organized by the family members of the late Z A Nizami and the KDA Club. The pictorial book written in English has been compiled and published by his son Tariq Nizami.

A large number of people from different walks of life, including the SSUET Vice-Chancellor, Prof Dr Jawed H Rizvi and the SSUET Registrar, Syed Sarfraz Ali, were present on the occasion.
Posted by Chief Editor at 4:17 PM Links to this post