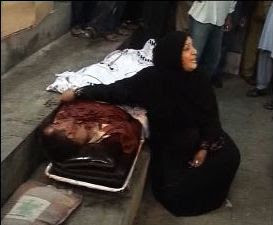 Dakait and Aqeel were buried in Mawach Goth and Aurangzeb and Nazeer were laid to rest in Mewa Shah after their funeral prayers were offered at Cheel Chowk's nearby Eidgah, Lyari. Charity pioneer Abdus Sattar Edhi and the Lyari town nazim attended the funeral.

Most of the day Baloch-dominated areas Malir, Gadap and Pak Colony stayed shut and protests sporadically erupted after Dakait and his three accomplices were shot dead Sunday night in Steel Town.

The seemingly invincible Rehman Dakait, whose legend as a Lyari gangster was so strong that the word ‘dacoit’ had become his surname, was shot dead with three of his men in Steel Town Sunday night at Kathore Morr on Link Road. The bodies, which were being kept at the Edhi Morgue at Sohrab Goth, were finally released after a large crowd protested outside the morgue. The protestors, many of who were women, were family and Dakait supporters who arrived in buses and vans in large numbers. A heavy contingent of police was deployed.

The bodies were taken to Lyari via Mauripur in a procession that passed the Lyari Expressway, escorted by the police, to keep traffic flowing smoothly.

After the shooting, the bodies were taken to Jinnah hospital for a post mortem and so far, the only report that has been released is that each of the dead had been shot three or four times. There has been no report on approximately when they were shot, or from what range. The full report on the post mortem is expected later.

No FIR has been lodged yet, confirmed the Steel Town SHO. The police cited this as the reason for not releasing the bodies to their families. However, the bodies were released after a large crowd protested.

SP Chaudhry Aslam confirmed the news of the encounter to the media at Jinnah hospital along with police chief Waseem Ahmed.

Dakait was notorious as Karachi's most feared gangster who ruled a sprawling network of guns and drugs out of the congested neighbourhood. His main rival Arshad Pappu is in jail.

According to CCPO Waseem Ahmed, Rehman Dakait was wanted in more than 100 cases, including the murders of some 80 policemen and the kidnapping and torture of Inspector Nasir Ali. Ahmed added that Dakait had previously been arrested but had escaped. He termed Dakait’s death an achievement for the police and said that the Sindh governor and the Sindh home minister had announced rewards of Rs 1,000,000 each. The sum will be divided among the members of SP Aslam’s party, according to their involvement in the encounter.

He claimed that with Dakait gone, the police will be able to bring law and order to Lyari and create a sense of normalcy for the residents of the town. SAMAA
Posted by Chief Editor at 9:54 PM No comments: Links to this post