With only a couple of years left for the Aligarhians to celebrate Sir Syed Ahmed Khan’s 200th birth anniversary in 2017, glowing tributes were paid to the great reformer and educationist on the occasion of Sir Syed Day, marking his 198th birth anniversary.

The day was observed under the auspices of Aligarh Muslim University Old Boys Association (AMUOBA) which held a function in this regard at the campus of the Sir Syed University of Engineering and Technology (SSUET), Karachi.

Largely attended by the Aligarhians and the followers of Sir Syed Ahmed Khan, the ceremony was presided over by the SSUET Chancellor, Engr Mohammed Adil Usman, and addressed by eminent speakers who included scholars, writers, critics and intellectuals.

They spoke at length on the life and achievements of Sir Syed Ahmed Khan and his unmatched services and mission for the causes and renaissance of the Muslims of South Asia which ultimately led to the creation of Pakistan under the dynamic leadership of Quaid-e-Azam Mohammad Ali Jinnah.

Chancellor Adil Usman, described Sir Syed Ahmed Khan as the founder of a new culture in South Asia which helped the Muslims to come out of a quagmire. “It was a difficult mission but, Sir Syed Syed through his devoted and missionary zeal made it possible,” he lauded.

“He set the direction of the Muslim society which was indeed a tough work to do at that crucial time of the history,” the Chancellor remarked.

Engr Adil Usman, particularly referred to the construction of Sir Syed Tower on AMUOBAs land opposite Arts Council of Pakistan and described it as a great achievement, He announced that the Tower named after the visionary, will be completed within the stipulated time, thus materializing the dream of the Aligarhians.

He described the construction of 6-storeyed Z.A. Nizami Block at the SSUET as another accomplishment, adding that it has been completed in a record time and as a result academic activities also started here. He credited the success to all Aligarhians who deserved appreciation.

The Chancellor made it clear that the objective of Sir Syed Tower was not to get financial benefits, but the revenue to be earned from this project will be spent on the cause of promotion of education. He pointed out that SSUET has a very experienced faculty which made it an institution of international standard.

In his speech, Prof Sehar Ansari recalled his recent visit to USA and said that Sir Syed’s Mission was being vigorously promoted by Aligarhians living in North America and Canada which reflects that Sir Syed’s movement is alive both in the East and the West.

He called upon the new generation to follow the mission and footsteps of Sir Syed Ahmed Khan in order to encounter the ever changing conditions and meet the challenges of the current world order and thus provide a hope for new morning. He said that Sir Syed had a broadminded personality who followed wisdom

He said that during his visit he informed the Aligarhians about the activities of AMUUOBA, particularly the role of SSUET, construction of Sir Syed Tower and AMUOBA’s magazine ‘Tehzib’ which was vigorously applauded in their meetings.

The eminent researcher and educationist, Prof Dr Waqar Ahmed Rizvi, described Sir Syed as an epoch-making figure who greatly influenced the generation after him. He particularly referred to his services in the field of science through the Scientic Society established by him and said its rays reached Europe.

Dr Waqar said that Sir Syed propagated national aspirations through his magazine ‘Tehzib-ul-Ikhlaq’ and promoted two nation theory when the Hindus called for making Hindi the national language and as a result whereof the MAO College and Aligarh Muslim University came into being.

Prof Tahir Masood said that Sir Syed saved the Muslims of South Asia from downfall and it was because of him that the dream of an independent land for Muslims could come true. He referred to the allegations leveled against Sir Syed by his opponents and said that he was the one who exposed the imperialists through his magazine Tehziful Ikhlaq.

Agha Masood Hussain, through his discourse said that the mission and thoughts propagated by Sir Syed Ahmed Khan were unmatched and it was through his sheer wisdom that he created awareness among the Muslims to take course to modern knowledge.

He recalled that Sir Syed was aware of the adverse affects of mercantile economy being introduced by East India Company and, therefore, prepared Muslims to protect themselves from its horrible effects.

Earlier Arham Mushtaq and Shah Zeb Rehmani, two SSUET students, made beautiful speeches in Urdu and English on the life and achievements of Sir Syed which drew great applause from the audience, while Editor Tehzib, paid poetic tributes to the great reformer.

The function culminated with vote of thanks proposed by the General Secretary AMUOBA, Masood Alam and singing of traditional ‘Tarana-e-Aligarh’ by SSUET students in unison with Aligarians
Posted by Chief Editor at 4:05 PM 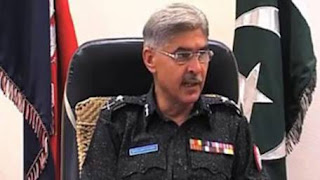 The Inspector General Police (IGP), Sindh, Ghulam Hyder Jamali, has called for expeditious completion of the project computerization of service data of Sindh Police officials and personnel and setup the Central Electronic Sheet Branch at Central Police Office in this regard.

He issued the directive at a briefing in which he was apprised of the steps taken for different schemes under E-policing project and police welfare.

The IGP directed all the Range DIGs to immediately send all relevant details to the Director Information Technology Branch, CPO, so that the Human Resource Management System is implemented in one month.

The Director IT informed the meeting that over 35 percent of computerization work of service data of Sindh Police personnel has been completed and the rest will also be completed at the earliest. It was informed that Electronic Policing projects include online registration of FIRs; Criminals Record Management System, issuance of E-driving licences, Video Conferencing System, Command and Control System etc. and their implementation if being ensured.

The directives were issued that Central Police Officers should be assigned responsibilities in the process for direct monitoring from Central Command and Control System in connection with the security arrangements during Muharram-ul-Haram, so that time police response could be ensured to any area or venue.

The IGP instructed that police mobiles equipped with latest cameras should be made available in all important areas besides their deployment at the Head and Tail of Muharram processions.

The meeting was told that a sum of over Rs 500 million had been disbursed during 2014 and 2015 in connection with the payment of compensation to families of martyred police personnel besides the allotment of plots and provision of free education to their children in SZABIST. AIG Welfare,

Erum Awan informed that besides Karachi, police hospitals and dispensaries are also functioning in Hyderabad, Shaheed Benazirabad, Sukkur and Thatta and 12 other districts for provision of medical assistance to police personnel under Police Welfare Project.

It was revealed that besides provision of medical equipment and other necessary facilities, steps are being taken for their upgradation.

The IGP called for initiating satisfactory measures for providing modern and effective medical facilities to police officials and personnel and particularly ensure Hepatitis Screening Tests for C and B affected personnel besides ensuring vaccination of non-affected personnel.
Posted by Chief Editor at 4:01 PM