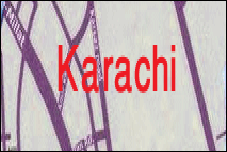 Four people including a woman were shot dead and five people were injured in various incidents of violence in Karachi late on Friday, a private TV channel reported.

A girl, 19 and a boy, 7, were among the injured. They were hit by stray bullets in two different incidents on Friday.

According to the channel, unidentified people also set ablaze three vehicles and injured the owner of a hotel in Liaqatabad area of the city.

The armed men also torched buses on MA Jinnah Road and in Garden, North Nazimabad, Gulistan-e-Jauhar areas of the provincial capital.
Posted by Chief Editor at 2:31 PM No comments: