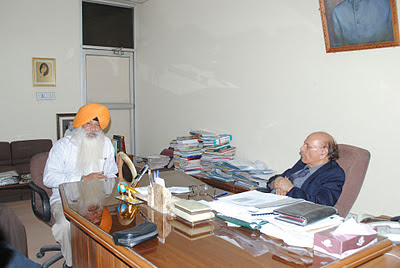 
Santosh Singh, student of Sir Syed University of Engineering and Technology (SSUET), who belongs to Sikh community and graduated from this university in 2009 will do his Ph.D. in IT at the expenses to be borne by City University New York from where he did his Masters.

This was stated by his father Sardar Heera Singh when he called on Engr Z.A. Nizami, Chancellor, SSUET, in his office in on January 11.

Heera Singh, who remained Advisor to Shaheed Benazir Bhutto when she was in government and is now chairman of Arambagh Gurdwara Trust, had come to thank the Chancellor for his help which he had extended to him in providing admission to his son Santosh at a time when he was financially unable to pay admission fees for his son.

Heera Singh informed the Chancellor that after graduating from SSUET in Computer Engineering, his son went to S and obtained admission in with the financial help of his brother, a doctor in the .

He said Santosh did his Master’s with bright colors and in recognition the University has undertaken to let him do his Ph.D. at its expenses and also provided him an exalted job in the very university making him in charge of the telecommunication department. 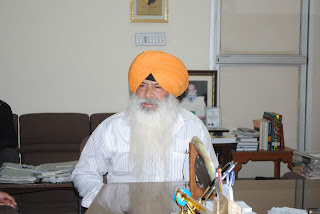 Visibly moved, Heera Singh once again deeply thanked the Chancellor whose help, he said, paved the way for his son to achieve his goals.

Engr Mr Nizami told Heera Singh that in admissions are provided with out taking religion, cast, color or creed into consideration. He said that in keeping with the traditions of greater reformer and educationist, no student is allowed to give up his education in this university just for financial constrains.

Heera Singh informed that Aneel Singh, his doctor son, spent Rs 40 lac to let his brother Santosh continue his higher studies and doing Masters in the . He said his daughter Aneela is also a doctor in .