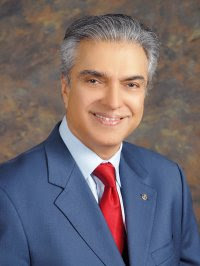 Ali Rehman is now a happy, lively four-year old with a ready smile and eyes that twinkle like stars. The youngest among four children of Khalil-ur-Rehman, a labourer from Azad Kashmir, has been rehabilitated through the efforts of Rotary International, one of the leading voluntary service organizations.

Today, Ali can almost do a slow run, albeit a minor limp, which has not stopped him from going out to play with his siblings, but most heartening to see, is that Ali’s infectious smile had returned.

Overwhelmed with emotion and moist eyes Ali’s father Khalil-ur-Rehman said ‘I am overjoyed to see my son walk again’ he continued to say ‘but my heartfelt gratitude lies with the Chairman of Pakistan Polio Plus Committee, Aziz Memon, a humanitarian and a true philanthropist, whose act of kindness has restored hope in my child and made him smile again.’

Khalil-ur-Rehman hails from Neelam Valley in Muzzarfrabad, Azad Kashmir. Although a native of Azad Kashmir, he had moved to Karachi in search of better opportunity a couple of decades ago, working as a laborer. He sends three fourth of his earnings to his family in AK, struggling to eek out a living on his meager resources.

Other then being a happy affable little boy, with a mischievous smile, Ali Rehman’s biggest set-back in life was his ill fated right foot. He contracted Type 3 poliomyelitis at the age of 2 years.

Walking for him was close to impossible. Ali’s smile vanished, he became withdrawn, unable to use his leg; he couldn’t take 2 steps without tumbling, but most disheartening was the lonely look in his eyes, as he watched his siblings, going out to play in the fields.


Ali would look with a feeling of sadness at his plight. His right ankle experienced degenerating muscle failure, and his ability to stand on both feet, was impossible. Ali’s father first had him tested at the Jinnah Hospital in Karachi. The tests results were ambiguous, so Jinnah sent Ali’s tests to Islamabad for confirmation. The lab tests in Islamabad revealed that Ali was indeed a victim of the debilitating disease called polio.

Discouraged by the news, his father vowed he would do everything in his capacity to get him treated. His community in AK dissuaded him and the local doctors surrounding his neighborhood, insisted that there was no respite in-store for Ali, except physiotherapy.

Desperate and dejected he approached the Polio Plus Committee’s Chairman Aziz Memon. The Chairman met with Ali’s father, and reassured him of his help. Mr. Aziz Memon referred Ali’s case to Murshid Hospital and Health Care Centre.

For the first time, Ali’s father could see a ray of hope. He went with Ali, where the CEO of the Murshid Hospital Dr. Abdul Sattar E Jaffar had already informed the hospital administrative department in advance of Ali’s case. Dr. Jaffer had referred Ali’s case to one of Murshids capable orthopedic surgeons, Dr. Rehman Beg. Dr. Beg called upon Ali for his first appointment on 22nd January’2010, for a detail check-up. Ali Rehman was diagnosed as EQUINUS right foot (Post polio deformity).

Dr. Rehman Beg operated on Ali Rehman on 8th February’2010 at the Murshid Hospital, (free of charge), for subcutaneous lengthening of Achilles’ tendon in equinus deformity of the right ankle joint. A plaster cast was bound for 2 weeks, to help heal the ankle. On 22nd February 2010, Dr. Rehman Beg’s Surgical RMO Dr Suhail Ahmed removed the plaster cast, stating that the ankle had healed well.

Ali Rehman started taking baby steps again, after his corrective surgery, but he was so enthused with his ‘new and improved’ foot, that he used every minute of the day, to practice walking again.
Posted by Chief Editor at 5:15 PM