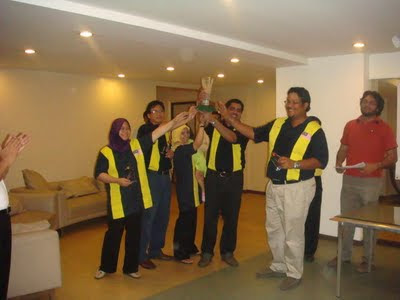 KARACHI: Malaysia had a field day in the Inaugural ASEAN Karachi Bowling Tournament winning all three titles of the tournament held on Sunday, 6 December 2009 at a well reputed Bowling Alley in Karachi. The first ever bowling tournament initiated and organised by the Consul General of Malaysia in Karachi, H.E. Mohd Khalid Abdul Razak, saw the participation of all 4 ASEAN countries i.e. Indonesia, Malaysia, Thailand and Vietnam. The four teams participated for team event consists of a mix team of 3 men and 2 women and for both men’s and women’s individuals. The ASEAN Consul General and spouses headed their respective teams for the challenge. After battling for more than two hours, Malaysia clinched the team event title by accumulating 1832 pins with Indonesia at the second spot with 1452 pins, followed by Vietnam and Thailand. The Malaysian also took the men’s and women’s individual titles with H.E. Mohd Khalid Abdul Razak clinched the men title and Mrs. Julia Lukman the women title. To make it a complete Malaysian victory, both the runners-up titles for men’s and women’s individuals also went to Malaysian i.e. Mr. Lukman Sayuti and Madam Aniza Khalid. Indonesia took the third spot in men’s individual with Vietnam securing the same position in women’s individual.
During the award giving ceremony, H.E. Consul General of Malaysia recorded his thanks and appreciation to all his ASEAN colleagues and families who had participated in the true spirit of sportsmanship and made the event a thrilling and memorable one. He stated that the sports event will further promote cooperation, understanding and relations among countries of ASEAN in Karachi. The organising of the event also is an ample proof that the metropolis is safe and peaceful for foreigners and portrays ASEAN friendship and solidarity with Pakistan. The Dean of ASEAN Karachi, H.E. Jomphool Manaschuang and Madame Patama from Thailand presented the prizes to the winners and followed by refreshments.
Posted by Chief Editor at 11:58 PM No comments: