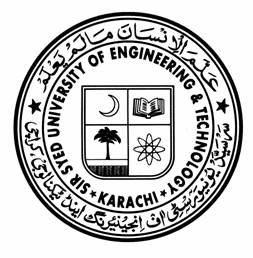 By Abdul Qadir Qureshi
The three-day 14th IEEE International Multiple conference, being held at the Sir Syed University of Engineering & Technology (SSUET), Karachi, entered into its second day on December 23 and continued whole day with various technical sessions being attended by delegates from home and abroad.
The heavy schedule of three days of deliberations included 13 scholarly lectures, 68 paper presentations besides seven workshops. After the inauguration on December 22 the conference schedule included 2 lectures and two tutorials on first day.
On December 23 the morning and afternoon sessions included three lectures and three tutorials. On the concluding day, December 24, the deliberations would include 8 lectures and two tutorials. Besides, the ICT Research and Development Fund, will also be giving five demonstrations of various projects being financed by it.
The scholarly lectures are being delivered by Ahmed E Kamal from Lowa State University on the topic of advances in network coding-based self-healing in Autonomic networks; by Dr Faraz Zaidi from KIET Karachi, on “Fuzzy sets and visual analysis”; by Qamarul Wahab from Linkoping University NEDUET on “Graphene, the Noble Prize for 2010”, by Dr Zia Amavul from SUNY Fredonia, NY;  on “ block-sorting transformations with Pseudo-distance technique for lossless compression of color-mapped images”; by Dr Syed Khaliqur Rehman from KIET Karachi on “WBAN Protocols”; by Prof B.S. Chowdhry from Mehran University of Engineering and Technology, Jamshoro on smart structural health monitoring WSN based bridged monitoring as a example”; by Dr Junaid Zuberi from SUNY Fredonia, NY on “sensor network programming and applications”; by Dr Muhammed Moinuddin from Iqra University on “collaborative spectrum sensing for cognitive radio networks”; by Dr Jawwad Shamsi from SUNY Fredonia, NY on “understanding cyber security”’ by Dr Rehan Qureshi from Iqra University on “adhoc interconnected mobile  networks”; by Dr Haroon Rasheed from Telecom Department SSUET Karachi on “next generation wireless technologies beyond 4 G.
Among the seven tutorials to be held during the course of conference deliberations, one tutorial of importance and interest would be given by Dr Raziq Yakub from the University of Tennessee on the topic of “applications of communication technologies and controls in existing power grid in Pakistan for energy efficiencies”.
Other tutorials will be given by Dr Kashif M. Rajput from NUST, by Dr Jawwad Shamsi from FAST; by Dr Shoaib Zia Khan/Dr Khawaja Bilal Mahmood from NUST;  Prof Dr Quratul Ain Tariq from NEDUET Karachi,; Dr Syed Faraz Hasan from NED University.

Souls Unshackled to be launched at KIBF on December 17

Paramount Publishing Enterprise will launch another unique title in two languages which is a story of a young prisoner, who has completed his education while facing charges connected to the murder of a local boy in Swat. 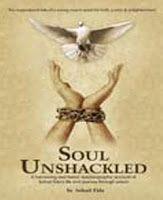 The launching ceremony will be taking place at 4 pm on December 17 in the Hall Number 2 of the Expo Centre where the 7th Karachi International Book Fair 2011 is being held with great fanfare.

The book is being launched in two languages. While the edition in English has been titled ‘Souls Unshackled’ the book in Urdu has been named ‘Na Qafus Na Ashiyana.’

Dr Masuma Hasan,. Chairperson, Pakistan Institute of International Affairs (PIIA), and a former Ambassador, will be the chief guest in the launching ceremony to be presided over by Niaz Ahmed Siddiqui, Former Inspector General of Police, Sindh.

A large number of intellectuals, media professionals and the industry leaders are expected to grace the launch of a harrowing and heroic autobiographical account of a prisoner. 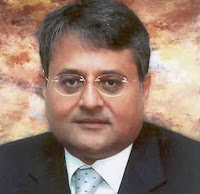 The Chairman of the Pakistan State Oil (PSO), Engr Sohail Wajahat Siddiqui, has called upon the engineers of the future to pledge to strive relentlessly towards achieving engineering excellence.

“You should have complete knowledge of your respective engineering fields and find out their own specialized core”, he told them while delivering a lecture on “Engineering Excellence” at Sir Syed University of Engineering and Technology (SSUET), Karachi.

The lecture was organized by the SSUET in collaboration with Management Consultancy and Training Services (MCTS), headed by former IG Sindh and an ex-DG NIPA, Niaz Ahmed Siddiqi.

Engr Sohail Wajahat suggested that all the career counselors at schools and colleges should help the students in letting them choose their field or otherwise they will not be able to achieve excellence.

In his 90-minute talk, Engr Sohail Wajahat, who recently quit Siemens Pakistan to head Pakistan State Oil as its chairman, was candid in telling the graduating engineers to try to understand the meaning of “excellence” and strive hard to achieve it for a bright future.

He pointed out that engineering is something in which people find different solutions and the upcoming graduates should come out as “valued engineers” with three basic values which, if carried by them in life, they would end up as excellent engineers.

An excellent engineer should firstly be excellent human being with excellence and innovation being other values, he exhorted.

In order how to achieve excellence, the PSO Chairman narrated his own example and said that his parents firmly implanted in his mind that he should always be first class first with respect to parents being the foremost principle and he truly came up to their expectations.

He told the engineering students that in order to achieve excellence they will have to keep clear targets before them and they will have launch successful ideas or otherwise people would not listen to them.

Replying a question, Engr Sohail Wajahat said that PSO has no responsibility in the ongoing power crisis as it is only a fuel supplier. He said the problem is with generation and distribution and this cannot be achieved without making investments.

He said a permanent solution to power crisis lies in continuous operation of plants as well as regular payment of bills by the consumers.

To another question, Chairman PSO said that every institution must have a Research and Development (R&D) budget to help the faculty and students in carrying out their research activities.

He did not agree with a questioner that utility organizations like power suppliers subject the common consumers to harassment. On the contrary the dishonest people do not pay taxes and steal electricity and make complaints, he stated.

“We live beyond our means and do not limit ourselves to our budget”, has said adding that this kind of behavior gives rise to corruption.

He was of the view that our engineers having passed out in 80s or 90s do not update themselves although they are engaged in the profession of teaching the younger generation. This is not excellence and they should update themselves with latest knowledge to being excellence in engineering.

To another question Engr Sohail Wajahat said that people always blame others instead of being responsible to their own profession to achieve excellence. Engineers should create engineering innovations and keep themselves updated for meeting the future challenges, he added.

He called for continuous training of faculty and described the same as highly imperative. He said to solve the problems they should find solutions and if not then they cannot become excellent engineers.

On the occasion Engr Sohail Wajahat offered internship for 10-12 students of SSUET and called for providing the names of such internees along with details of their projects.

At the end of the talk, the chief guest signed the pledge made by upcoming others along with other participants.

KESC BOARD OF DIRECTORS APPROVE ISSUANCE OF 7.25% RIGHT SHARES

Karachi Electric Supply Company’s Board of Director has approved to offer right shares to the shareholders in its meeting held on July 29, 2011. The entitlement of the shareholders, post book closure, would be notified after the approval of Securities and Exchange Commission of Pakistan.

KESC announced to offer 7.25 per cent right issue as per approval of the Board, that will be 29 ordinary right shares for every 400 ordinary shares held by the shareholders at par, which is Rs. 3.50 per share.

KARACHI July 10, 2011: the fourth session of the ‘Youth Leadership Development Programme 2011 on Entrepreneurship organized by All Pakistan Memon Federation (APMF) Education Board at the National Museum of Pakistan on Sunday . Imran Azeem, Training Manager: Shell Livewire Trust briefly explained the concept of entrepreneurship and need of planned, well-thought entrepreneurship as a value added activity in the economical development of any country. 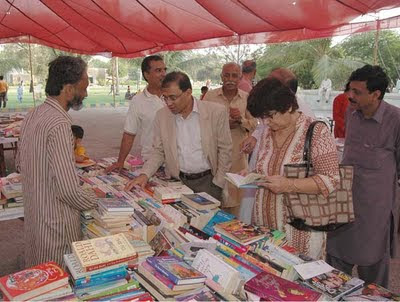 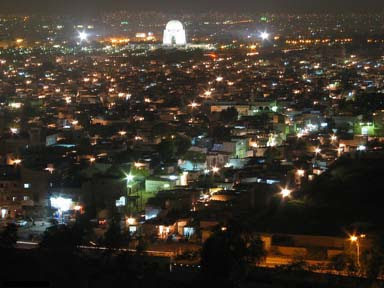 Administrator Karachi Muhammad Hussain Syed has said that the housing census in Karachi will be performed from 5th to 19th April 2011 in which more than 8 thousand officials will take part while wearing especial caps issued by Government of Pakistan.
He appealed to citizens of Karachi to take special interest in this very important campaign and extend full support and cooperation to the staff deputed for housing census as all future planning and allocation of resources would directly rely on this census campaign.
Administrator Karachi expressed these views while addressing a packed press conference in DCO Camp Office on Tuesday.
City Government officers including all EDOs and officers of Census Department of Government of Pakistan were present on this occasion.
Administrator Karachi said that the housing census was an important phase of the whole exercise during which every building would be taken as a housing unit whether it contain many families, however the flats in a building would recorded as a single house. The teams would make door-to-door visits. After this phase is completed, the second phase would be launched from August. Under this, each citizen would be contacted in person and asked for their details by the census teams.
He said that two separate teams have been formed which will be monitored by Additional EDO Revenue Matanat Ali Khan and District Officer Abid Zawwabi. These teams would visit the city to oversee census work while the concerned DDOs Revenue, Town Municipal Administrator and Town Police Officer will also supervise the work within their jurisdiction.
Administrator Karachi said that 90 percent of the staff for housing census has been acquired from Education Department.
Replying a question he said that he believed achieving 100 percent result as this would be in the interest of citizens.
To another query he said that the police help would be taken during census in sensitive areas of city and if the police think necessary, then it can seek for help from other agencies.
Posted by Chief Editor at 1:00 AM Links to this post

KFC Chicky Club is opened to children aged 12 and below. It has more than 1,300 active members who enjoy discounts on Chicky Meals and other special offers at KFC and discounts from our partners such as Arena, Sinbad, Oxford Leisure Club, Slazenger and many more.

The carnival was themed FUN and LAUGHTER and kids were transported into the world of Colors of joys and excitement with a huge Bouncing Cake.They were also entertained by balloons, jugglers, stilt walkers, face paints, games, great Puppet and magic shows, entertainment, contest and other activities. Long queues were seen at the game stalls such as the Darts, Sand Art and Clay Art where great KFC prizes were given away to all participants.

KFC's mascot Chicky with his kids Friends razzed and dazzled everyone with their first ever musical performance, The most favorite Chicky Dance. The Dhool-wala was made it more exciting when ever Chicky went with kids for adventurous Chicky ride.