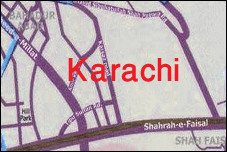 MQM's Rabita Committee while denouncing the firing at JSQM rally stated that anti-state elements would not be allowed to sow the seeds of hatred and prejudice in the soil of Sindh and MQM will spoil all such conspiracies.
While addressing a press conference here Sunday members of MQM's Rabita Committee (Coordination Committee) stated that the Government should expose the criminal elements engaged in target killing of MQM's members and involved in firing at JSQM Chairman Bashir Khan Qureshi.
MQM denounces firing at Chairman of JSQM and termed the incident as a conspiracy to bring the people of Sindh in confrontation with each other by sabotage the peace of the province and to derail the incumbent democratic set up in Sindh, Rabita Committee said.
Rabita Committee also urged on President Zardari and Prime Minister Gilani, Federal Interior Minister, Chief Minister Sindh and Provincial Interior Minister Zulifqar Ali Mirza to investigate the firing incident at JSQM chairman by firing FIR against the accomplices.
Rabita Committee further elucidated that peaceful policy of MQM should not be termed as weakness of the party, as MQM has aimed peace and stability in the province and will not allow anti-state elements to sabotage the peace in the metropolitan city.
Posted by Chief Editor at 9:31 PM No comments: Links to this post