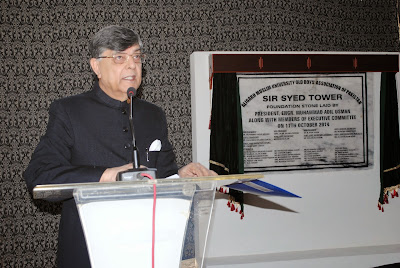 
The foundation stone of the multi-storeyed Sir Syed Tower was laid at an impressive ceremony at the Head Office of Aligarh Muslim University Old Boys Association (AMUOBA) in Karachi on October 17.

The multi-million imposing tower building is an ambitious project of the AMUOBA facing the Arts Council of Pakistan in the neighborhood of the Sindh Assembly, the High Court of Sindh and the Sindh Secretariat.

“It is like a dream having come true,” Engr Mohammed Adil Usman, President AMUOBA and Chancellor, Sir Syed University of Engineering and Technology (SSUET), remarked in his speech while laying the foundation stone in the presence of the beaming Aligarhians.

“We were planning since long to build the Sir Syed Tower on this prestigious land of the AMUOBA in the memory of the great reformer and educationist Sir Syed Ahmed Khan. However, it was getting delayed for one or the other reason,” the AMUOBA President pointed out adding that eventually it took a start with the ground breaking ceremony as a result of sincere efforts and strategic approach adopted for the achievement of the association’s cherished goal.

He specially referred to the great and undeniable contributions of late President AMUOBA, Engr Z A Nizami, and its Secretary General Late Engr Mohammad Zakir Ali Khan for conceiving the ambitious project.

“The services of the present Aligs and those who are not among us any more were also an important part of this grand project,” he recognized

Appreciating admirable achievement of the Aligs, Engr Adil Usman described Sir Syed Tower as the great source of historical value besides being an academic and corporate hub for the promotion of intellectual, cultural and creative activities.

“I believe that if you take first initiative to start a project with good faith, God will certainly help you in its accomplishment,” he said and added now he had a strong feeling that this project will be completed without any hurdle within the given time frame.
Posted by Chief Editor at 2:45 PM