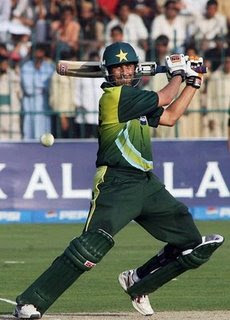 KARACHI: The last day play of the first test between Pakistan and Sri Lanka, being played in the National Stadium here, continued when the host captain Yunus Khan after brilliantly scoring triple ton finally lost concentration at 313 and went back to the pavilion.

Yunus Khan yesterday added feather to his cap as the only batsman thus far scoring triple ton against Sri Lanka and playing a record captain’s inning from Pakistan.

Yunus Khan today came to the field having an eye on Brian Lara’s record and was seen chasing the highest ever score of 400 runs, but sadly he couldn’t achieve the target, as he was bowled out by Sri Lankan bowler Fernando at 313, when his team’s score was at 596.

Pakistan team with four wickets in hand, still struggling to equalize the Sri Lankan first inning scores and save the follow-on.
Posted by Chief Editor at 1:06 PM No comments: Links to this post