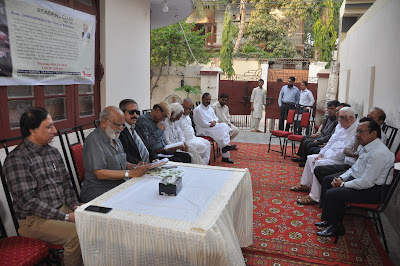 
Noted journalist, writer and thinker, Mahmood Sham, has reckoned that the journalists in electronic media are less skilful and trained in comparison to those in the print media and there was a need to hold workshops for their training.

He was replying to questions from participants on the occasion of the launch of his book ‘Indifference in the time of extremism’ held in Karachi.

On the occasion, the author read out selected excerpts from his book and observed that electronic media did commit errors but there was no doubt about the talent and wisdom of people attached to this sector.

He was of the opinion that there’s a vast gap of technology between the electronic and print media as electronic is much ahead of print media but those in print media are literary in nature and take advantage of libraries.

In journalism, he viewed, no one can be made a reporter or sub-editor with out proper training whereas in electronic media get hold of the microphone on the very first day. 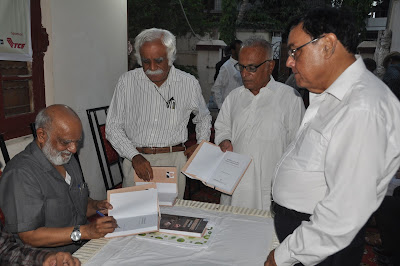 He told a questioner that he was satisfied with his career and he didn’t feel repentance on adopting any other profession.

To a question from the resident editor of Nawa-e-Waqt, Amin Yousuf, Mahmood Sham recalled that the journalists’ movement of early 1970s was much bigger than that of 1978 when newspapers did not publish throughout the country for nine days and the government shunted out 200 journalists.

Speaking on the occasion Prof Tausif Ahmed said that official secretariat was in vogue even today. He recalled that Mahmood Sham was the first to become victim of attack on press and at that time official secret comes under the purview of treachery.

Others who put questions to Shamji were Agha Masood, Kazi Asad Abid, Yawar Mehdi and Aijazul Yaqin. Mahmood Sham said that Roedad Khan who today was championing the cause of democracy and revolution had been in the forefront during his time in putting restrictions on him and the press.
Posted by Chief Editor at 12:27 PM 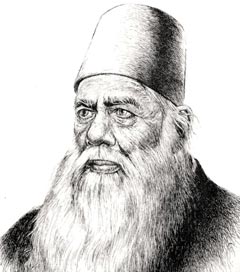 This was stated by AMUOBA President, Jawaid Anwar, who is also the Chancellor of the Sir Syed University of Engineering and Technology (SSUET), in his latest interview.

Preparations were in full swing and the events would include a conference and a seminar, besides the celebration of the Sir Syed Day in a grand style this year.

Sir Syed Day is celebrated every year on October 17 but this year will mark the 200th birth anniversary of the great reformer and educationist.

Jawaid Anwar informed that the celebration activities had already started and in that regard two lectures on the life, achievements, mission and philosophy of Sir Syed Ahmed Khan had been held. The lectures were delivered by Prof. Islahi who specially came from Aligarh for the purpose.

“We plan to hold a Bio-medical conference dedicated to Sir Syed Ahmed Khan later this year. We will also organize a quiz competition on Sir Syed while the Sir Syed Memorial Lecture is also included in our plans",

Chancellor Jawaid Anwar informed adding that as many as three books on Sir Syed will be published and launched to highlight his monumental contribution.

The AMUOBA President said that the concept of social reforms of Sir Syed Ahmed Khan was based upon acquisition of modern scientific education.

The key ingredients of his concept are proper upbringing, character building and tolerance and the Aligarh Muslim University proved to be the laboratory where these concepts were experimented, which produced students who possessed the above traits. The positive result of this experiment was the establishment of Pakistan, Jawaid Anwar stated.
Posted by Chief Editor at 12:24 PM