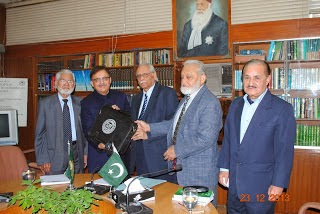 “The Sir Syed University of Engineering and Technology (SSUET), Karachi, is an institution on which, anyone having an admiration and love with the great reformer and educationist Sir Syed Ahmed Khan, can feel pride for its being the fruit of Sir Syed’s educational endeavours.”

Dr Jawaid Rizvi welcomed Dr Shaheer Khan and appreciated his services for the cause of the Aligarhians at the international level.

In his remarks on the occasion Dr Shaheer highlighted the establishment of the Aligarh Muslim University Alumni USA. He informed that its foundation was laid in the 1970s and now it has chapters in about 15 states which are playing an important role towards promotion of cause of education and culture.

He further disclosed that a directory of Alumni members has also been prepared containing names and addresses of some 25,000 members from 102 countries of the world.

According to him quite a few websites have been developed and uploaded on the internet in relation to Sir Syed Ahmed Khan and the which contain enormous information about the Aligarh Movement which ultimately led to the creation of .

On the occasion he paid rich tributes to the late SSUET Chancellor Engr Z A Nizami and the the late General Secretary AMUOBA, Engr Mohammed Zakir Ali Khan, for the cause of promotion of the Aligarh Movement.

Appreciating the services of Dr Shaheed Khan in relation to the cause of Aligarhians, the AMUOBA’s General Secretary Mukhtar Ahmed Naqvi, described the establishment of the Sir Syed University as a great achievement of the Alumni of the Aligarh Muslim University and this exemplary feat was being eulogized the world over.

He suggested that a campaign be launched in the for Endowment Fund of the Sir Syed University of Engineering and Technology.