Yousuf expected to announce his retirement on Monday at KPC 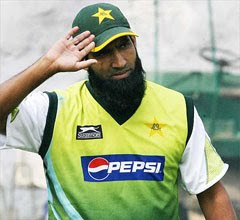 Pakistani star batsman Mohammad is Yousuf expected to announce his retirement from international cricket. He will make a formal announcement to retire on Monday at Meet the Press of Sports Committee of Karachi Press Club.

The Pakistan Cricket Board has suspended Mohammad Yousuf and Younis Khan for an indefinite period because of infighting which impacted on the national team's performance during the series against Australia. Yousuf told local urdu daily that it was not an emotional decision and he consulted his elders, friends and family members.

Yousuf was made captain after Younis Khan quit the captaincy last year. Under his guidance, Pakistan drew Test series against New Zealand before being routed 3-0 by Australia in a Test series and 5-0 in the one-day internationals and one T20 match.
Posted by Chief Editor at 2:42 PM Links to this post