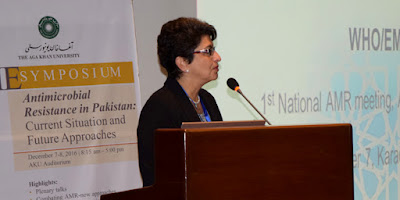 
The experts have warned that misuse and overuse of antibiotics in humans and animals has resulted in the widespread distribution of resistant organisms in several countries, including Pakistan which means that antibiotics which were previously able to cure will not work any more.

They were addressing a national symposium on antimicrobial resistance (AMR) organized by the Aga Khan University (AKU), Karachi.

The symposium coincides with the launch of the National Strategic Framework for Antimicrobial Resistance by the Government of Pakistan the other week.

“Antibiotic resistance is as much a problem in Pakistan as in the Western hemisphere,” Dr Sadia Shakoor, Assistant Professor of Pathology and Laboratory Medicine at AKU, reckoned.

“We know that infections acquired in the community are becoming resistant because antibiotics are available freely to the population even without prescriptions, leading to overuse. This needs to be checked through physician training to limit prescriptions and legislation to prevent over-the-counter availability of antibiotics,” she added.

Superbugs, resistant to antimicrobials, are estimated to account for 700,000 deaths each year worldwide. A study shows that drug resistant infections will kill an extra 10 million people a year – more than currently die from cancer, by 2050 unless action is taken. 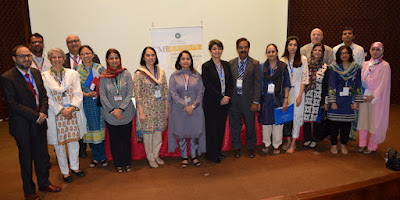 “At the UN General Assembly in September this year, leaders from 193 countries signed a landmark declaration agreeing to combat antimicrobial resistance,” Dr Rana Hajjeh, Director, Department of Communicable Diseases Prevention and Control, WHO Regional Office for the Eastern Mediterranean., observed.

“Every signatory has agreed that drug resistant infections must be tackled as a priority. The nations have committed to develop surveillance and regulatory systems on the use and sale of antimicrobial medicines for humans and animals, encourage innovative ways to develop new antibiotics and improve rapid diagnostics, and raise awareness among health professionals and the public on how to prevent drug resistant infections,” she said while having ongratulated Pakistan for developing the first national policy on antimicrobial resistance.

Dr Rumina Hasan, Professor of Pathology and Laboratory Medicine at AKU highlighted the need for strengthening diagnostic facilities to better diagnose infectious diseases and detect AMR to guide health care providers in selecting appropriate treatment. The AMR develops naturally over time, usually through genetic changes in bacteria. However, misuse and overuse of antimicrobials accelerates this process.

“Most illnesses with fevers, e.g., colds, flu and diarrhea, are caused by viruses, for which antibiotics are not recommended. However, due to over-the-counter availability, antibiotic consumption is found to correlate with these seasonal illnesses implying the misuse of antibiotics,” Dr Erum Khan, Assistant Professor of Pathology and Laboratory Medicine at AKU, remarked.

“Other examples of misuse include use of antibiotics as growth promoters in farming of animals for food, livestock, fish and poultry farming. As for humans, antibiotic usage in animals too should be restricted to manage bacterial infections. The rate of discovery of new antibiotics has slowed down drastically and the antibiotic pipeline is running dry. There is an urgent need to conserve and safeguard the antibiotics that we have available.”

The other speakers included Dr Muhammad Salman from National Institute of Health, Dr Ejaz Khan from Shifa International Hospital, Dr Rene Hendriksen from Technical University of Denmark, Dr Ali Ahmed from University of Veterinary and Animal Sciences, and Dr Revathi Gunturu and others from AKU.

The event was organized by AKU’s Department of Pathology and Laboratory Medicine in collaboration with the University’s Department of Continuing Professional Education, Health Security Partners, USA, Medical Microbiology and Infectious Disease Society of Pakistan, and Pakistan Academy of Sciences
Posted by Chief Editor at 4:11 PM